Audiences were taken on an emotional roller coaster ride, witnessing ordinary lives unfold in small-town America during the turn of the century, as they watched performances of Our Town at The Wheatley School on Nov. 20 to 22.

Chronicling the life, marriage and death of the Webb and Gibbs families, the ultimate message of this three-act 1938 Pulitzer Prize–winning Thorthon Wilder drama is that life should be valued. 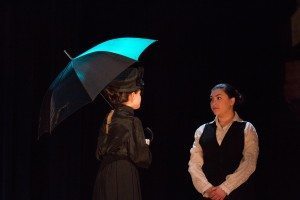 Portraying an extended family on stage has bonded the Wheatley Theater Company—a talented, close-knit group of eighth- to 12th-graders, many of whom plan to focus on performing or working behind the scenes as they head off to college.

This was the second Wheatley drama for English teacher Colin McKenna, who directed The Laramie Project last fall. Technology teachers Paul Chisholm and Thomas Storck were the technical advisors and set design team, and Megan Lang was the lighting designer.

“The play’s profound message has special resonance for our students as they exhaustively prepare for their adult lives,” said director McKenna. “Wilder reminds us, regardless of career or status, that all lives have a unique majesty and sublime grace. It is not what you do in life, but how you live life. Each of our lives, each of our jagged paths through time, is an absolute wonder, a stunning miracle.”

The Wheatley Theater Company is already planning their spring musical, Little Shop of Horrors, for March 26 to 28. Visit wheatleytheater.weebly.com for news, pictures and tickets.