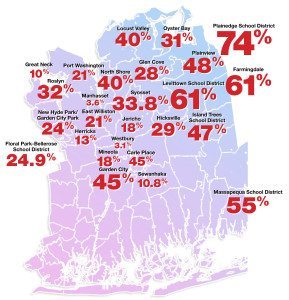 Common Core testing is taking place throughout the public schools of Nassau County and controversy over the testing, in both the English Language Arts (ELA) and mathematics segments, remains as heated as ever.

The Roslyn School District does not have a specific policy regarding the tests. “Our philosophy is that it is a parent’s right and decision to opt out if they so choose,” the statement read. “It is our obligation as a district to administer the exams, which we do according to the directives of the state.”

Parents do have concerns about the testing. Two parents, Steve and Rachel Lefkowitz, expressed such concerns in a letter to the school district.

In the letter, Lefkowitz noted that his children took the math test, but had questions about their classmates who went to the auditorium during the testing.

“We, as parents in the district, feel like we need direction as we continue to work on the right message to send to our children,” the letter stated. “Unfortunately, they are pawns in this political mess. Some of them are taking a test that, while giving them some practice, does nothing but rattle their confidence since no one their age should know the answers to the absurd questions on the test. Others are stuck in the auditorium not being able to speak for hours.” Lefkowitz told The Roslyn News that there is no organized opposition to the testing in the Roslyn area.

Jeanette Deutermann, founder and administrator of Long Island Opt Out and co-founder of New York State Allies for Public Education, had her own thoughts on the Long Island-wide numbers.

“I have mixed feelings on results of the refusal numbers,” she said. “I am so incredibly grateful to parents that have chosen to stand up for public schools, their children and our public school teachers by refusing to allow their children to participate in the state assessments this year. However, that is mixed with sadness that our classrooms have come to this. I would love for nothing more than to know that legislators, Gov. Andrew Cuomo and the State Education Department [SED] have finally heard us loud and clear as to what we want and do not want for our children’s education here in New York. Unfortunately, we continue to hear the rhetoric that “parents just do not understand how important these tests are.” It is not that we do not understand the importance of knowing the progress of our children, it’s that we do not believe that these assessments are valid or useful in any way to give us that information on how they are progressing. We value the importance of child-centered, hands-on learning, and these Common Core assessments have robbed our children of that rich, creative learning environment all children deserve. We will continue to refuse these assessments in growing numbers until Gov. Cuomo, the legislature and the SED reverses course.”

Concerning other school districts, Herricks, according to Long Island Opt Out, had a 13 percent opt-out rate, while in North Shore, 40 percent of students did not take the test.