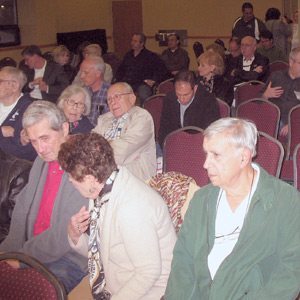 While the Roslyn Board of Education has held their regular meetings on the 2014-2015 budget, the district has also held several public meetings to explain and educate taxpayers about the budget proposal and ancillary matters, especially Proposition 3 on major renovations at the schools in the district.

The most recent community meeting was held on April 28 at the East Hills Auditorium. Those in attendance included Barry Edelson, director of Community Relations and Dr. Joseph C. Dragone, the district’s Assistant Superintendent for Business. Superintendent Dr. Dan Brenner chaired the meeting, attended by up to 85 residents.

According to a brochure widely distributed in the district, “An entire generation of students has been through the Roslyn Public Schools since the residents last voted on a large-scale capital referendum.”
The tax increase contained in the new budget contains an increase of 0.65 percent.

A mathematical formula used would determine the exact increase for each home based upon its appraised value. The average increase would be $60 a year.

At the meeting, Brenner narrated a video presentation with facts, figures and charts pertaining to the district. In general, the purpose of the bond and new budget will enable the district to upgrade and modernize its facilities.

The plan highlights are as follows:

• Roslyn High School: The front of the school will be redesigned allowing for more parking and a new, improved traffic pattern. The bus garage, which is in a bad state of disrepair, is currently located in front of the building. It will be demolished and a new maintenance garage will be built adjacent to the District Facilities Building
• The Harbor Hill Elementary School: Tennis courts will be removed. Air conditioning will be installed in the cafeteria. A 2,400 sq. ft. multi-purpose room will be erected. The front entrance at this school as well as that at the East Hills School will be rebuilt so as to provide for better security.
• The East Hills School will get library and computer lab modernization. The cafeteria, library and second floor classrooms will be air-conditioned.
• The Roslyn Middle School will have the least amount of work done as it had an extensive renovation 15 years ago.
• The Heights School’s library will be renovated. The library and second floor classrooms will be air-conditioned.

In terms of itemizing the budget, according to the slide presentation and the district’s web site, the largest source of revenue by far (89 percent) comes from property taxes. As for expenditures, salaries for teachers, administrative and other personnel amount to 53 percent of the total. Employee benefits come in second at 27 percent, with other expenses (such as textbooks) totaling 20 percent.

At the meeting, Brenner’s remarks included the fact that enrollment in the school system has been declining. For example, a graduating class (presumably from an elementary school) would consist of 270 students this June. Incoming freshmen in September would be less than 200 pupils.

An attendee asked why all of this money should be spent under these circumstances. Brenner replied that it was important to keep the district up-to-date to remain competitive. He added that the recommended actions were a necessity, not a luxury. He further emphasized that there would be no cuts in programs or services. Early retirement packages are being offered to teachers, many of them being accepted.

Brenner was then asked if there were any special revenues coming into the district. Brenner said that there are many disabled children coming from other Long Island school districts because they have the facilities and teachers to accommodate them. The revenues from this program bring in approximately $5 million per year.

As for the bond, it will be paid off by 2036. Because of the district’s high credit rating and low prevailing interest rates, the debt service for the bond should be relatively low.

In Albany, State officials recently held an online briefing to financial officers of school systems in New York. There is a plan under discussion to issue rebate checks to taxpayers proportional to the school taxes they pay in a given year. This would be very beneficial to district taxpayers, as the rebates should nullify any hikes in school taxes, thereby softening the blow to Roslyn taxpayers if the bond passes.

Besides voting on the school budget/bond proposal, Roslyn taxpayers will be asked to cast a separate vote on the same day to approve or disapprove the Bryant Library budget.

The library’s board of trustees voted unanimously to override the two percent cap as provided by State law. They are requesting an increase of 2.2 percent instead.

According to Library Director Cathy Mealing, the library is running out of space.

The tax increase will help to pay for three new boilers and two HVAC systems. The library has also applied for grants to allow it to make the same purchases.

The vote on the school and library budgets, plus the bond referendums will take place on Tuesday, May 20 at the Roslyn High School, from 7 a.m. to 9 p.m.