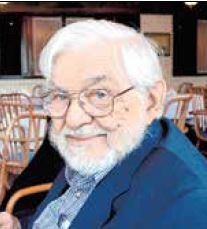 Jack Zilko, age 95 of Roslyn Heights, passed Sept. 29. Jack was an accomplished engineer and artist, growing up in Yorkville and the Bronx. At 16 he was awarded a scholarship to study Physics at the University of Chicago and at 18 left to enlist in the Navy. During his service in WWII he was selected for research and testing of airborne radar, learned to fly, and studied at the Rad Lab at MIT. Jack used his GI Bill to study at the Art Students’ League in New York City. While working as an engineer in Greenwich Village he met the love of his life, Mildred “Milly” Henner.

They were engaged in a week and married for 67 years. Some of Jack’s engineering accomplishments included his work at Fairchild, where he managed a team to design the first reconnaissance camera to go into space, for which he received a patent, and was later recognized with a medal as a “Space Pioneer” from the CIA. Later in his career he joined Inflight Motion Pictures as the Worldwide Service Manager for 33 airlines.

Jack’s greatest passion was for the arts. He co-founded one of the first SOHO
art galleries, the Second Story Spring Street Society, and opened an art school
in his Roslyn home. He taught more than 1,000 students in his 45+ years of
teaching and helped hundreds to prepare portfolios for college admissions.
Many of them went on to have careers in the arts.

Jack was a modern Renaissance man, with a love of the arts, nature, science, photography, and history. He painted and read every day. He loved music and was a patron of the opera. His proudest achievement was as a loving husband, father and grandfather. He is most beloved by his wife, Milly, and children; Jackie (Wolf ), Vicky (Steve), Evan (Serena), and Larry (Julie), and grandchildren; Georgia, Woody, Joey, Cassie, Jackson, Donavan, Leila, Sema and Luna, and great grandchildren; Cece and Marina. He will be missed dearly.

In lieu of flowers donations can be made to the National Resources Defense Council (NRDC.org).