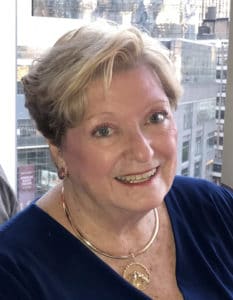 Helen Angela (Capobianco) Raduazzo passed from this life into the arms of angels July 15. Born July 5, 1938 in Brooklyn. Her family moved to Middle Village, Queens and eventually settled in Port Washington where she attended the newly opened Schreiber High School, from which she graduated in 1956.

On Manorhaven Beach, young Helen met her love, Michael. Love at first sight (almost), they married in her home parish of Our Lady of Fatima on May 25, 1958. Michael’s two-year deployment in the Army brought them first to San Antonio, TX, and then to Tacoma, WA where they had their first son, Joseph. Eventually love of family brought them back to New York where they rented a small apartment in Roslyn.  There they had two more boys, Michael and Robert. They eventually built a house in Port Washington and Helen made it a home.

Her love for the Catholic Church was only eclipsed by her love of family. Three boys proved challenging but she still found time to serve as PTA president at Manorhaven Elementary School, as a Cub Scout Den Mother (Troupe 222), with Cancer Care, and of course, at Our Lady of Fatima Church.

With her trademark strength and determination, she planned countless dinners, holidays, and the yearly family vacations to the beautiful beaches of Montauk. Family and friends were plentiful and her capacity for compassion was boundless. Over the last few years, Helen and Michael found their retirement utopia in Juno Beach, Florida. They became snowbirds, but always made it home to spend her favorite holiday, Christmas, with family.

Surely, she has found eternal happiness in the arms of loved ones who welcomed her arrival into heaven.  Helen is survived by husband Michael, sons Joseph (Heather), Michael Jr. (Shari), and Robert (Rob), grandchildren Megan, Kelsey, Jonathan, Rachel, Kathryn, and Michael Dominick.

A service and memorial will be held at a later date yet to be determined.