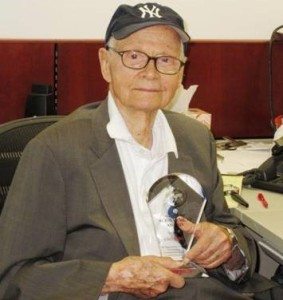 Sixty-three years ago, Roslyn resident Bill Greiner jumped into the real estate business. What followed next was something revolutionary. Just as the postwar boom was taking off, Greiner’s business, Greiner-Maltz Long Island, played a major role in the rapid industrial development of both Nassau and Suffolk County.
“Bill virtually created the industrial brokerage business on Long Island and was responsible for the industrial development of over 50 million-sq.-ft.,” said Tom Attivissimo, president of Greiner-Maltz. “Even today, he remains a valuable asset to the team, working closely with me in tracking availabilities for our clients.”
For those achievements, Greiner was presented with a Lifetime Achievement Award, recognizing his more than six decades at the firm. The ceremony, which was held June 14 at the Plainview Holiday Inn, was attended by more than 100 notable guests in the business and real estate industry including Bill Mannix, executive director at the Town of Islip Economic Development Agency and Nicholas Terzulli, director of Business Development at the Nassau County Industrial Agency (IDA), who presented Greiner with a proclamation.
After finishing up a hitch in the Army in 1948, Greiner returned to New York, where he worked at a low-level job for a real estate firm in Manhattan. That translated into a real love for real estate, one that culminated with his partnership with Dick Maltz. As the economy boomed, so did the new business. In 1953, Greiner-Maltz had a 300-sq.-ft. office in Long Island City. In 1962, Greiner-Maltz opened its second office in Westbury, which would later be replaced by an office in Woodbury. Today, Greiner-Maltz operates out of four offices: Long Island City, Queens; Plainview, Long Island; Moonachie, New Jersey and most recently Rye Brook, Westchester. For that entire time, Greiner-Maltz has been engaged in the leasing, selling, appraising and managing of industrial, commercial and investment property in the Tri-state area.
In the meantime, the 92-year-old Greiner has no plans to retire. The secret to his longevity, he said, is keeping himself busy and his mind sharp by working seven days a week.
“The secret to a healthy body is maintaining a sharp mind,” Greiner said. “I am humbled by this recognition and am proud that Greiner-Maltz has continued to expand and evolve. I am confident that our new Plainview office president, Tom Attivissimo, will maintain Greiner-Maltz’s reputation for excellence.”
Another constant is Greiner’s attachment to Roslyn.
In the late-1950s, Greiner and his family moved to the village and he has remained a grateful resident ever since.
“I have been living in the same house in Roslyn since 1957, and I couldn’t imagine living anywhere else in this world. I initially moved to Roslyn because it was convenient for me to get to work, but I have grown to love the community over the many decades,” Greiner said. “I especially enjoy the ambiance. Moving from the city, Roslyn reminded me of the country.”
“When I first moved to the area, I planted a few Pin Oak trees around my new house. I remember when those trees were merely small sticks in the ground. Today, they stand tall and gloriously,” he added. “Every time I look at them, I am reminded of Roslyn’s beauty.