It’s a big shot, but I believe in art, I believe in artists, and I want to represent Long Island artists, sculptors, potters and more,” says Marsha Tarlow, surrounded by a scattering of canvas paintings and miscellaneous abstract pieces. “There’s so much talent all around us right here, so I’m taking a chance.”

Tarlow has been sharing her passion with the greater North Shore community through her gallery on Main Street in Roslyn known as Roslyn Village Gallery, a collection of her own pieces as well as the works of local artists from a variety of mediums.

The opening of the original gallery a year and a half ago was a dream come true for Tarlow, a lifelong artist with a dedication to maintaining the prominence of art on Long Island; but when the opportunity to move to a larger space just around the block was brought to her attention, she felt she had to act.

The new space, located at 1374 Old Northern Boulevard, transports those who enter to decades past, reminiscent of a gallery on the streets of old SoHo with high vaulted ceilings, brick wall backdrops and ample space for featuring grand paintings, as well as creating them on the scene. It will also harbor metal sculptures, pottery, glass work and unique handmade objects.

Tarlow aims to not only generate a certain look, but also foster a greater cumulative feeling among artists and onlookers alike.

“The atmosphere around an artist is always positive,” says Tarlow with humbled satisfaction as she glances around the new gallery, yet to be finished at the time. “There’s always some kind of magic that goes on, and I love that magic. I want other people to understand how magical it can be to create.”

Tarlow, who describes her style as impressionistic leading toward abstract, draws inspiration from landscapes and nature, capitalizing on the surrounding Gerry Park and Roslyn Pond, which lie just behind the new gallery.

Because of its prime location, Tarlow has considered the idea of providing painting lessons, which can be given either in the gallery itself or “en plein air.” While she will not advertise formal lessons, she said that upon being asked by interested artists in training, it is “certainly a possibility.”

It is no surprise that local painters would value Tarlow’s insight, as she is the product of extensive training at the School of Visual Arts, Hofstra University and the Roslyn School of Painting. She attributes her deep understanding of a range of classical styles to the mentorship of Charles Pasqualina, founder and director of the Roslyn School of Painting, who instructed and inspired Tarlow and thousands of other students over the course of nearly 60 years before his death in July 2016.

“He never made you feel like you couldn’t do anything,” she says. “And that has a lot to do with the emotion and confidence behind it. It’s very emotional, as is the case with any of the arts, because you’re putting yourself out there. Everything is you, from start to finish; it’s all up to the painter.” 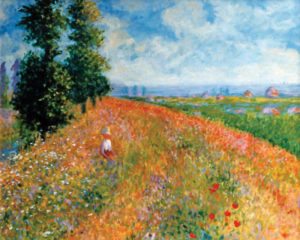 It is this emotionality that has been the driving force behind the Roslyn Village Gallery, and Tarlow hopes that it will go beyond the bounds of a traditional gallery, offering a space where community members can congregate and socialize, while also admiring the talent and beauty that surrounds them.

“Art takes over,” says Tarlow of her passion. “It shouldn’t overpower people that live there, but it should certainly complement their environment. I want people to look in the window and see painters at the easel. I want people to look at things that create a good feeling inside of them, because that is what art is meant to do.”

For more information about the Roslyn Village Gallery, visit www.roslynvillagegallery.com.