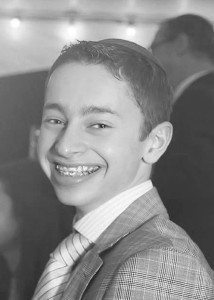 While Roslyn resident Max Goldman was recovering from a bout with leukemia, he wanted to find a way to use modern technology to help others battling the same disease. In 2010, Goldman was diagnosed with leukemia. He completed treatment in May 2013. By 2015, he had developed Fingerstik, an iPhone app for cancer patients, one designed to help them keep track of their height, weight and blood counts. As important, Fingerstik will convert between metric and imperial units, and calculate an Absolute Neutrophil Count (ANC) if desired. The ANC is a key indicator of the body’s ability to fight infection. Fingerstik also allows patients to refer to previous dates of their treatment process with ease, and to edit them with the push of a button. Finally, Fingerstik can add people to the owner’s device so they can track their blood counts and other medical information.

“During my treatment, I found out that there wasn’t any easy way to keep track of blood count or height and weight,” Goldman told The Roslyn News.

Information on all of these vital signs are provided by Fingerstik, which can now be downloaded for free from the App Store.

Working with his own family members, Goldman realized that other families needed a simpler way to keep track of the massive amounts of information that cancer patients were regularly given. Goldman developed Fingerstik by first mastering Apple’s Swift Programming Language. The iPhone, as noted, is now available and patients and their families are already signing up, even though the product is in its infancy.

Not surprisingly, Goldman hopes to pursue a career in computer science. He already is off to a great start and his desire to help others is typical of Roslyn area youngsters, whose acts of charity continue to benefit their neighbors near and far.