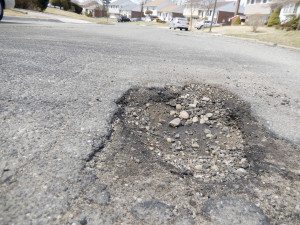 Spring is here and people’s minds are turning to the baseball season, proms and all the great pool clubs in the Roslyn area. Local motorists, who suffered through one of the longest winters in recent memory, have also had to contend with potholes littering streets and highways.

Not all streets in local villages are under the jurisdiction of those towns. Some are the responsibility of the Town of North Hempstead, Nassau County and New York State. And when it comes to potholes, it appears that a government closest to home is the one that works best.

In the Village of Roslyn, the Department of Public Works handles streets under village control. Roslyn, a village official said, remains receptive to phone calls from local residents.
“If a resident calls, and gives us the location, we’ll call it in,” said Anita Frangella, village clerk.

The Village of Roslyn Harbor, according to another official, has seen no more than 10 potholes on village roads. All of those troublesome spots have been “addressed immediately” by an outside contractor that the village retains for such work. Roslyn Harbor includes a slice of Bryant Avenue, a busy thoroughfare, which leads to the Harborview shopping mall and entrances to Northern Boulevard by the William Cullen Bryant Viaduct. Potholes on that avenue, the village official said, remains a problem as the village “keeps calling” county officials for help.

The Village of East Hills’s Department of Public Works is also quick to attend to pothole problems on local streets. As with Roslyn Harbor, the village has its own relationship with the county. East Hills, a village official said, has a “huge file” of letters that it intends to put the county on notice for.

“It’s horrible,” Koblenz told The Roslyn News. They haven’t done anything. There are roads they have to rip off and repave.”

Koblenz added that Harbor Hill Road is in especially perilous shape. Residents call village hall with stories of damages, but all the village can do, Koblenz added, is tell those residents to “call the county.”

“We do not have any records of these villages contacting us to report potholes,” a spokeswoman for the county DPW emailed The Roslyn News. “We ask that they contact us with the locations so that we can address the potholes within 48 hours. We urge all residents and municipalities to report potholes via our Nassau Now App, social media and the DPW 24-hour hotline at 516-571-6900.”