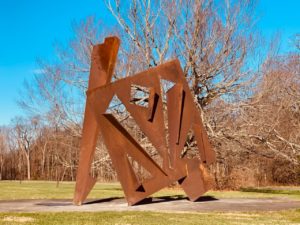 The work is Dreadnought, a stunning example of Modernist sculpture by Joel Perlman, whose international reputation has been made by works of a similar scale in London, Manhattan and in the Hamptons (the Parrish Museum recently acquired one of his outdoor works). Well known in the art world as one of the stars of the Andre Emmerich Gallery as long ago as the 1970s, Perlman is a beloved professor at the School of Visual Arts and a significant figure in the art history of our time. The work was originally made in 1990 at Perlman’s studio in Southhampton. It is a permanent addition to the Nassau Museum collection.

The installation itself was a dramatic operation. The ironworks where Perlman had stored it created a special wooden cradle for its transportation from Southhampton to Roslyn Harbor. At dawn on the morning of Thursday, December 10 it left the steel yard on a flatbed truck, along with a 100-foot-long boom crane that would be used to pick it from the truck and gently lift it to the concrete pad near the Museum’s entrance where it will rest. The site was chosen by Perlman in consultation with Museum director Charles A. Riley II, PhD.

The artist and a team of installers were on hand during the daylong process of angling the work for maximal effect in sunlight. Its warm golden patina and powerful gestures made an immediate impact upon the art lovers and strollers on the Museum grounds that day, who stopped to gaze in awe at the process of seeing a massive steel sculpture lowered to its position. By mid-afternoon, the foot-long steel pegs that fit into the base were inserted and the crane boom retreated and the job was done.

The sculpture joins 40 other works on the property by such major artists as Richard Serra, Mark di Suvero, Fernando Botero, Tom Otterness and Adolph Gottlieb, among others. The sculpture garden has been a landmark for lovers of outdoor art for the last three decades, and this significant addition will be a noteworthy event in the region’s art history.

-Submitted by the Nassau County Museum of Art 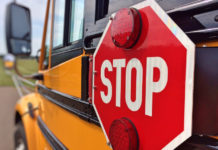 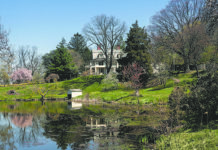 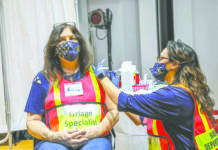