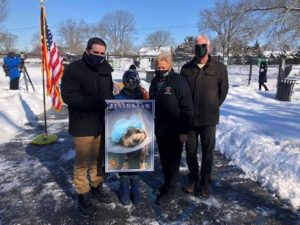 On Nov. 5, 2019, Legislator John Ferretti was outside his Levittown home with his family and a two-year-old Tibetan Terrier named Benny. While outside, a neighbor’s dog escaped a nearby backyard and attacked Benny. Ferretti, along with the help of two other neighbors, tried to remove the attacking dog’s jaws from Benny, but could not get them to release. Finally, after Benny gave up fighting, and laid down lifeless, the neighbor’s dog finally let go of the terrier.

Miraculously, Benny survived, but at a cost. He was forced to undergo multiple surgeries costing thousands of dollars. He suffered five fractured ribs, bruised lungs, a fractured chest cavity and multiple lacerations.

“I saw Legislator Ferretti just a few short hours after the attack on Benny happened, and you could see how visibly upset he was about this,” Legislator Rose Marie Walker said. “Our pets are like our children, and when something like this happens, it’s a terrible ordeal. This law will make sure that residents know about dangerous dogs in the neighborhoods and know to take precautions when in the area.”

Previously, other news reporting agencies have received a noncommittal response from Nassau County Executive Laura Curran about her stance on the proposed Benny’s Law, according to Ferretti. The only thing he knew is that she would be reviewing the legislation before making a determination.

“Since our press conference [about Benny’s Law] last Monday [Feb. 8], there has not been a meeting of the legislature,” said Ferretti. “Presumably, [Benny’s Law] will be passed on Monday [Feb. 22].” The meeting will be held after this story went to press.

Ferretti said the law has unanimous support of the public safety committee, based on a meeting held before the Feb. 8 press conference, and full support of the legislative majority.

“I would assume it’s going to have the full support of the minority as well, but I don’t know that for sure,” said Ferretti.

Following the attack, the dog that attacked Benny was taken by the Town of Hempstead and brought before a judge to determine if it could be returned to the community. The judge ruled that the dog was indeed a dangerous dog, but since the dog only attacked Benny, and did not bite Ferretti or any other people, the judge was forced to return the dog to its owner, with no notice being given to the neighbors in the community that a dangerous dog lived at that house.

After the ordeal, it was also revealed that the dog had a long history of attacking other dogs.

As a result of this, Ferretti and Walker joined with Nassau County’s Society for the Prevention of Cruelty to Animals (SPCA) Officer Gary Rogers and Ferretti’s 8-year-old son Johnny, to announce legislation to stop other families from having to go through this same ordeal. “Benny’s Law,” as Ferretti has dubbed the bill, mandates that if a judge determines that a dog meets the high threshold of being a “dangerous dog,” then the owners of said dog must mail the judicial order, as well as notification to all their neighbors within 1,000 feet (approximately six-block radius) to make sure they know of the potential threat. The notification will include the address of the dangerous dog and its identifying traits. An affidavit of mailing must be filled out afterward.

“This is a very important law, because if you live in, say, the Town of Hempstead and a district court judge has determined that you have a dangerous dog, but then move to the Town of North Hempstead or Town of Oyster Bay, there is no mechanism for those towns or your new neighbors, to know that you have a dangerous dog,” Rogers said. “This law and this database will help protect not just our dogs and pets, but also our neighbors from other dangerous dogs throughout the county. It will also give owners of dangerous dogs the information they need to help their pet and protect it and others from it.”

The police department will work with the Nassau SPCA to maintain a registry of judicially determined dangerous dogs, which will include the address of the property the dog is housed, the date of the incident, the duration of the dangerous dog designation, as well as the breed, weight, age and color of the dog.

“This is a very high threshold that you would have to reach to be on this registry; it’s not just a complaint that a dog is dangerous,” said Ferretti. “It has to be an unprovoked attacked, where the police are called, animal control comes to removed the dog, and then it has to go in front of a judge.”

Owners of both dogs would be summoned and only then would the judge make a determination that the animal is dangerous.

“The word ‘dangerous’ is somewhat misleading, it’s not just someone saying [the dog is] dangerous. There has to be a real, real serious incident precipitating being judiciously dangerous,” Ferretti said.

Speaking about his awareness of other neighborhood dogs and his own dog’s attack, Ferretti said, “I didn’t even know that a dog lived in this house, and it has lived in the house across the street from me for years. And that is because, to the owner’s credit, they were taking the proper precautions and never letting the dog out [unsupervised in the front yard]; accidents happen.”

“Since that day when Benny was attacked, I continue to watch community members walk past that house with their pets and young children, unaware that a dangerous dog lives just steps away,” Ferretti said. “This legislation will help to keep residents safe and informed; hopefully saving residents from having to go through what Benny, my family and I have had to go through.”

Ferretti said he has received calls from across the county, and even some from pet owners across the country, who have suffered similar or worse violent attacks on their own dogs, grateful of the efforts to make this law a reality.

“People have also responded to me and said things like dogs aren’t dangerous, people are dangerous,” said Ferretti. “I agree with that 100 percent; this is not about villainizing dogs or changing standards to increase what is judicially dangerous, that’s not what this bill is about.

“The only thing this does is provide notice when a dog is deemed dangerous,” he added. “Dogs have been deemed dangerous by judges for decades; it’s just that now when it happens, we’ll know it.”

Although Benny has made a complete physical recovery, he has not recovered mentally and emotionally. To this day, Ferretti said Benny cannot be around other dogs due to intense fear, and he is unable to go outside without an emotional struggle.

“The only [remaining] injury to Benny is that he’s a different dog,” said Ferretti. “He is not the same dog he was before the attack, and probably never will be again.”