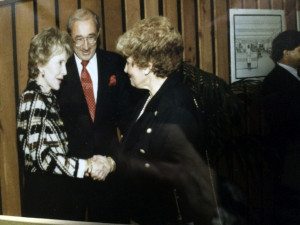 With the passing of former first lady Nancy Reagan on March 5, an era in recent American history came to a quiet ending. During her time as First Lady, Reagan had encounters with Roslyn and other North Shore villages.

The First Lady made two visits to St. Francis Hospital to demonstrate her deep interest in the cardiac treatment of needy children worldwide and the Rotary Gift of Life program. Elvie Costanza of Manhasset was presented to the First Lady.

On Oct. 4, 1988, the Nancy Reagan Hall in the Thomas F. Casey Pavilion at the hospital was dedicated in her honor. The event commemorated the First Lady’s visit and acknowledged the encouragement she has provided in advancing the cause of a greater St. Francis Hospital.

In addition, Reagan publicly hailed Roslyn’s preservation efforts as a model for the rest of the nation. In 1987, President and Mrs. Reagan traveled to Roslyn Harbor for the funeral of William J. Casey, the Roslyn resident who served as both Reagan’s 1980 campaign manager and as director of the Central Intelligence Agency (CIA). The funeral became a political sideshow, with President Reagan’s Central American policies being criticized from the pulpit.

Meanwhile, Reagan’s legacy lives on at the Gift of Life organization, which is still helping children all over the world. The Great Neck-based humanitarian organization has partnered with St. Francis Hospital for four decades in providing life-saving cardiac procedures to more than 250 children from 29 countries. Its mission drew worldwide attention because of Reagan’s actions.

“We couldn’t have made such a big impact on all of these children’s lives without our strong partnership with St. Francis Hospital,” said Robbie Donno, founder of the Gift of Life. “What began with one child from Uganda has grown into a global effort to help children from around the world.”

For more information on the Gift of Life, visit the website at www.giftoflifeinternational.org.

—Joe Scotchie contributed to this article