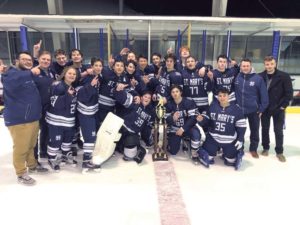 The Gaels captured the CHSHL Division ‘B’ Championship with a 4-2 win, earning a well-deserved trophy to bring home to Brother Kenneth Robert, a longtime faculty member and athletic director at St. Mary’s whose vision and leadership brought the team to multiple league championships and state titles over the years.

“Coming into the position as coach this season, I knew that it was my goal to restore the team to its former glory days. The athletes were such a welcoming group. By incorporating more of the underclassmen as they built confidence, they brought their best to the team at a critical point. We were 0-3 at the start but made sure we grew, and I witnessed the team play like a team when we won 5 in a row,” said Riley. Riley also noted that “learning about Brother Kenneth’s lifelong dedication to the Gaels ice hockey program was the driving force behind the coaching staff efforts this year. I am so happy to bring this trophy home to him.”

Athletic Director Mike Ryan added, “I am very happy for the coaching staff and all of the time they put into this season. Shaun Riley is a dedicated coach, and I was blessed to have him running things this year. I am also proud of this group of players for sticking together and giving their all for one another.” Ryan is looking ahead to next season knowing that the team is well positioned after proving their abilities on and off the ice.