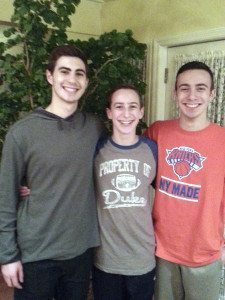 Cousins Jagger Gillman and Ethan Bradford have once again organized the annual Hoops for Harrison fundraiser, though they have decided to change things up a bit this year. What started as a basketball clinic two years ago has evolved into a three-on-three basketball tournament, the proceeds of which will go to the Crohn’s and Colitis Foundation of America (CCFA), as they have in years past. The North Shore High School juniors are committed to helping raise awareness about Crohn’s disease, which Jagger’s younger brother, Harrison, was diagnosed with at age 7.

“This year, not only do we have a committee to help us with new ideas, but we have changed the format,” said Jagger. “We changed it into a three-on-three tournament because we realized that as the kids grow up, they’d rather play games than go to a clinic and keep on learning skills.”

The tournament will be held at the Sid Jacobson Jewish Community Center, as the clinics were the past two years, on Sunday, Jan. 17. The cost for the co-ed tournament is $30, open to 16 teams, with three to five players on each team, in two time slots: third to fifth graders play from 1:30 to 3:30 p.m. and sixth to eighth graders play from 4 to 6 p.m. Kids with Crohn’s or colitis can participate for no charge. Other elements of the tournament include raffles, with prizes ranging from restaurant gift certificates to sports memorabilia, and pre-registration is required.

“It’s been easier because now we know what we’re doing,” said Jagger, “but it’s been harder because we’re in our junior year and we’re taking the ACT, all advanced classes and driver’s ed.”

The boys also volunteer for the annual CCFA walk and put time in at the office during the summer. They started a bake sale at the North Shore Middle School several years ago, which Harrison has taken over. Harrison, who is in eighth grade, loves basketball as much as his brother and cousin. The goal, they said, is for him to take over the reins when the older boys go to college and to continue raising money for the foundation.

“It’s really interesting to see the leadership skills that have developed from them creating this,” said Rachel Gillman, mother of Jagger and Harrison. “I don’t think you could get any better experience than actually living through the development and creation of your own community service project.”

A group of 15 peers will referee the games during the tournament and they have formed committees this year, which helps take some of the pressure off of Jagger and Ethan to do it all themselves.

“People find what we do intriguing and want to get involved,” said Ethan. “It’s a good feeling.”

“A lot of the kids will be repeat participants, but we are trying to expand and reach out to other districts,” added Jagger, noting that in the past they have attracted kids mostly from Roslyn and North Shore, but this year also have kids from Great Neck involved.

“Harrison has some really good models,” said Rachel. “He’s obviously going to want to take this over and they have made such a huge impact.”

Though the boys do set aside time to discuss the planning throughout the year, it’s something that comes up on family outings or any time the cousins are together. And while the 16-year-olds lead busy lives, they have a deep commitment to the cause.

“I feel like this is something I have to do,” said Ethan. “It’s close to my heart.”

“It’s part of the schedule,” said Jagger. “I’ve never had any doubts that this fundraiser should continue.”

This commitment comes from witnessing firsthand the perils of Crohn’s disease, an inflammatory bowel disease. Most of the time, Rachel said, Harrison is well, but when he’s not, the boys are living it also: the stress on the parents and the discomfort of Harrison.

“It’s definitely impacted our whole family,” said Rachel. “It’s part of what we do.”

Jagger notes that Harrison does not like the attention, even though it’s a positive thing.

Rachel said she explained to him that while the event is called “Hoops for Harrison,” it’s not only about him. They are doing it for all of the kids who have to go through what he does, in an effort to raise money and hopefully find a cure.

“And we hope to double it again this year,” said Ethan and Jagger.