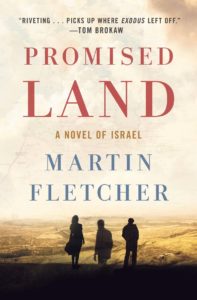 Fletcher covered world events for 40 years, mostly for NBC News. For 26 years he was their correspondent in Israel and for 15, the network’s bureau chief.

Dubbed the “gold standard of television war correspondents” by fellow journalist and CNN anchor Anderson Cooper, he has won almost every award in TV journalism. Among them, the du Pont, known as the TV Pulitzer; five Overseas Press Club awards, the Edward R. Murrow Award for Excellence several times; five Emmys and many others.

Promised Land is a sweeping saga of two brothers and the woman they love, a devastating love triangle set to the tumultuous founding of Israel.

“Promised Land is a great sweeping epic, reminiscent of Leon Uris’ Exodus; a moving story of triumph and tragedy, new love and historic hate, expertly told by a cast of unforgettable characters,” DeMille said. “Fletcher’s writing is superb and rises to the level of importance that this story demands and deserves. Historical novels don’t get much better than Promised Land.”

Tickets are $40 can be purchased at www.sjjcc.org/boxoffice.