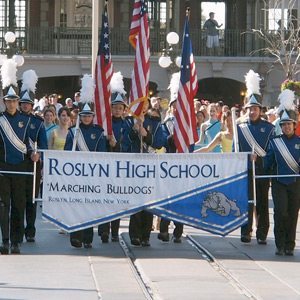 The band delighted the crowds at both the Magic Kingdom and EPCOT. Many members of the parent organization, the Marching Band Fans, flew to Orlando to cheer on the band. Band members had an incredible experience as they paraded down Main Street USA and the main thoroughfare of EPCOT.

In addition to the parades, the band members were also able to enjoy four of the parks at Walt Disney World and two at Universal Orlando. They also had amazing views of Disney’s Fantasmic and Illuminations fireworks and light shows.

Under the direction of Pat Patterson, the Marching Bulldogs will begin rehearsals soon for the next competition season, which begins in September. Any current 8 -11th grade Roslyn School District student interested in joining the band can contact band member Randi Antenberg at 516-695-2621.

The 2014-2015 season is sure to be another winning one for this entertaining band.