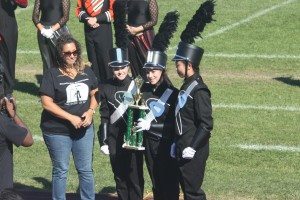 The Roslyn High School Marching Band, for the first time in its history, is now the top-ranked band in all of New York State.

At the Brentwood Show, held on Sunday, Sept. 20, the band scored a 71.6, over five points higher than any of the 14 bands in their class in the New York State Field Band Conference. They will be finishing their season at the prestigious New York State Championships which will be held in the Syracuse Carrier Dome on Nov. 1.

“Our goal is to win the Governor’s Cup at the Dome this year,” said Pat Patterson, the band director.

The Brentwood Show was based on Cirque De Soleil’s “Quidam.” The music was an exciting fusion of classical, pop, and jazz styles, which involves beautiful melodies and big powerful impacts, all visualized by the band’s constantly moving artistic drill along with the 19-member colorguard and seven dancers.

This year the band also has new uniforms and costumes. The 113-member Marching Bulldogs are one of the largest competitive marching bands on Long Island,which is quite a feat since Roslyn is considered a small school by the Field Band Conference.

The band started the season with weekly rehearsals in February for the colorguard and drumline, more rehearsals in May with the whole group and then, a week long band camp in August at Camp Taconic in the Berkshires of Massachusetts.

Come see the Roslyn Marching Band at the homecoming on Saturday, Oct. 2.