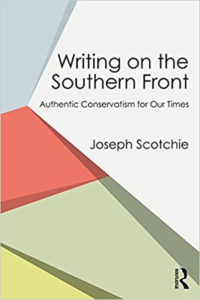 Longtime Roslyn News editor Joseph Scotchie has published his eighth book, Writing on the Southern Front. The book is compilation of essays and reviews that Scotchie has published over the past quarter century. Included are essays on such giants of modern literature as T.S. Eliot, Ernest Hemingway, Saul Bellow, John Updike, J.D. Salinger, Thomas Wolfe, Allen Tate, Robert Penn Warren and Wendell Berry. Sections are devoted to the work of Patrick J. Buchanan and Samuel T. Francis, both of whom have helped to shape the populist movements currently roiling politics in both Europe and North America.

“For a quarter of a century, Joseph Scotchie has been a thoughtful interpreter of the Southern agrarian literary tradition and its shirt-tail political cousin, paleoconservatism. These essays, whose subjects range widely from Pat Buchanan to Robert E. Lee, and from Saul Bellow to Thomas Wolfe, are both provocative and welcome.”

“A generation of Americans deprived of intellectual substance and force-fed flavorless cant can look to the living Southern tradition, thoroughly and masterly introduced and explicated in Joseph Scotchie’s Writing on the Southern Front, for sustenance and inspiration. Readers familiar with some of the writers Scotchie fearlessly treats will benefit from seeing them in their powerful and broad context; the uninitiated will delight in the discovery of works on American history, culture, and politics previously withheld from them by an understandably fearful left.”

Writing from The Southern Front is published by Taylor and Francis (New York and London). It is available online at Amazon and at local bookstores.