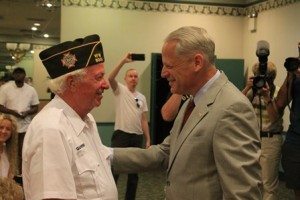 The location was the Albertson VFW Hall in Albertson as New Hyde Park resident Sgt. Gunter Harter was presented with the prestigious Purple Heart award.

Harter, a Vietnam War veteran, received the honor from Rep. Steve Israel (D-Huntington), who represents the Roslyn area in the U.S. Congress.

“Sergeant Harter, like so many of his fellow veterans, was not born in the United States but fought bravely in service for our country and never asked for, or expected anything in return,” said Israel. “It is an honor to stand here today with Gunter and his family and present him 47 years later with this Purple Heart that symbolizes the selfless sacrifice he made for a country he barely knew.”

Harter, a squad leader with the 4th Battalion, 21st Infantry Division, was on a patrol mission in Saigon when he was wounded in action on Dec. 13, 1968. More than 46 years after he was wounded in Vietnam, he finally received the Purple Heart, as well as the Cold War Recognition Certificate.

“Receiving the Purple Heart is an honor and more importantly a tribute to the brave soldiers I fought alongside and served with. I am proud that my family is able to share this moment with me and I thank Congressman Israel for working hard to make this possible,” Harter said at the ceremony.

Born in Germany, Harter was drafted in 1967, only six years after immigrating to the United States. The day after marrying his wife Helga, Harter passed his physical exam and was immediately sent to Fort Jackson, SC for basic training. After arriving at Fort Jackson, Gunter was told that he would be granted his U.S. citizenship before being deployed to Germany to be an interpreter aiding U. S. forces. Gunter was instead deployed to the jungles of Vietnam.

Upon arriving in Vietnam, in April of 1968, Harter joined the infantry division as squad leader. While on patrol on the above date, the point man in his squad was killed when a booby trap placed by the Vietcong detonated. The loud explosion shattered Gunter’s right eardrum and he was sent to an aid station in Saigon for treatment. After being sent to Japan, to receiver further treatment, Harter was sent back to the U.S. where he finished out his enlistment and was granted citizenship two years later.

Harter first reached out to Rep. Israel’s office in March of 2014 with concerns that some of his health problems were directly related to his exposure from Agent Orange while serving in Vietnam. Rep. Israel’s office worked with the Department of Veterans Affairs, and in January 2015, Rep. Israel notified Harter that the Department of Veterans Affairs had granted him a 50 percent disability rating, which entitled him to a monthly award of $917.

In May 2015, Gunter again reached out to Israel’s office about the Purple Heart, which he was told he was eligible for in 1969, after being wounded in action. Due to bureaucratic inaction, Gunter never received his medal. Israel contacted the Department of the Army and expedited a request to award the medal to Gunter. Less than 30 days later, on June 23, 2015, Gunter was granted his Purple Heart nearly 47 years after being wounded in Vietnam.

The Purple Heart is one of the oldest and most recognized military medals awarded to service members who were injured or killed in battle. This Friday, Aug. 7 marks the 233rd Anniversary of its creation.