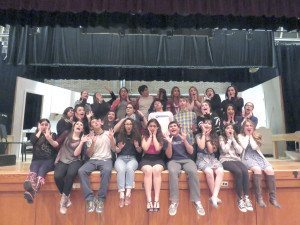 Lose yourself in another magical performance as The Wheatley Theater Company presents the quirky musical Little Shop of Horrors about a man-eating plant and the quest for a better life. The cast will put on four shows Thursday to Saturday evenings, March 26 to 28, at 7:30 p.m., as well as a matinée at 2 p.m. on Saturday, March 28.

This year’s production is truly a group effort. Instead of one traditional director, several talented staff members have been collaborating. English teacher Colin McKenna, who has directed the fall dramas solo the past two years, will be directing alongside music teacher Angela Luftig and English teacher Rick Leidenfrost-Wilson, who has directed the Wheatley musicals for decades while also producing off Broadway shows as owner/president of Off Sides Entertainment, Inc.

“It’s been very exciting to work with two veteran educators, Rick Leidenfrost-Wilson and Angela Luftig,” said McKenna. “Despite working in the theater world for many years, I do not have a whole lot of experience directing musicals, and compounded by the fact that I am possibly the worst singer in the Western Hemisphere, it has been a real lifesaver to be able to lean on two such talented musicians. Rick and Angela have been collaborating on the Wheatley musicals for years and having their expertise and friendly support during this process has been invaluable. They have been very supportive of my overall vision of the show.”

Leidenfrost-Wilson agrees, “I’m absolutely loving working on this show! It’s wonderful getting to be both choreographer and conductor. It’s the first time I’ve conducted a show in my 22 years at Wheatley, so I’m really looking forward to it, as are all the students in the pit band. The cast is so talented and a pleasure to work with. Even though I’ve done something like 35 shows at Wheatley, on Little Shop I get to work with incredibly talented colleagues like Mrs. Luftig and Mr. McKenna. Our school is SO fortunate to have such dedicated and talented faculty bringing the depths of their musical and dramatic experience to the students of Wheatley. It’s extraordinary. Truly. Extraordinary.”

The unrelenting snow this winter made regular rehearsals more challenging than usual. “With so many snow days and delays, this show has been a bit of logistical quagmire,” said McKenna. “But, it’s been fun to have Rick and Angela in the foxhole with me. We all believe that the Arts are a vital part of a student’s education, and by working together we hope that all the students involved are all having a positive and enriching extracurricular experience. Also, the show is a bit silly and fun, so rehearsals have been a blast.”

The students wholeheartedly agree. “Little Shop of Horrors is such a different show to be a part of,” said Juliana Luber, who’s playing the lead, Audrey. “It’s very dark, but it’s still a comedy, and it just has a way drawing people into it. The idea of a man-eating plant with a musical built around it at first gives people a feeling of ‘what?!,’ but there is also a beautiful story about the desire for happiness, love and more in life.”

“The cast is so incredibly talented and has the ability to portray this complex story in such a magnificent way,” explains Luber. “This show, of course, has a lot of sentimental value to me, as it is my last of many productions with the Wheatley Theater Company,” says the senior. “I could not have asked for a more supportive and loving cast to be surrounded by. We are all one big family, whether it’s the same loving type of family from Our Town, or this new twisted family with Little Shop of Horrors. We can always count on an incredible time together, regardless of what is thrown towards us. Saying goodbye to that will be nearly impossible, but as my character Audrey says, “in a way, we’ll always be together.”

Audience members will be in for quite a visual treat, seeing how the tech team and cast will portray the man-eating plant. And having to play such a character offered quite a challenge, too.

“This show has really pushed my love for acting further than I’ve ever taken it, said Morgan Misk. “Because I’m playing the voice of Audrey 2, my facial expressions, costumes and body language, things that most actors rely on, can’t help me at all. I have to create a whole character solely on my voice. That, to me, is crazy, something I thought I would never do. That is what I love about this show. It opens the door to new possibilities for everyone involved.”

Freshman Devyn Bennett is thrilled to be part of this production. “I’m so excited to be in yet another WTC production,” beamed Bennett. “This play shows the rough times that people face and how it can get better! I can’t wait for the show and it’s gonna be great!”

Don’t miss this fascinating production. Performances will be held in The Wheatley School Auditorium, 11 Bacon Road, Old Westbury, NY 11568. Tickets are $10 (senior citizens are free) and are available at www.wheatleytheater.weebly.com.