Little Shop Of Horrors A Hit At Wheatley | Roslyn News
Wednesday, May 25, 2022 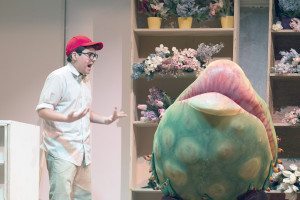 The Wheatley Theater Company cast and crew have outdone themselves once again with their rendition of Little Shop of Horrors. From Thursday, March 26, through Saturday, March 28, they performed the quirky musical about a man-eating plant and the quest for financial success and fame.

The acting, singing, music and set were all outstanding. The creativity was, in part, due to the collaboration of English teacher Colin McKenna, who directed alongside music teacher and vocal director Angela Luftig and English teacher turned choreographer and conductor Rick Leidenfrost-Wilson. Technical advisors and set designers Paul Chisholm and Thomas Storck provided quite an elaborate backdrop; lighting designer Megan Lang illuminated it all.

Freshman Talia Rosen was invaluable as assistant director, as were Jenn DioGuardi as stage manager and Samantha Leong as assistant stage manager. The costume designer team of freshman Kimberly Esquilin and assistant Michelle Porter was headed by Maura Calio, who loyally returned to help though her daughter graduated from Wheatley last June. Madison Misk added just the right touches as makeup/set dresser, while her twin sister Morgan, in addition to playing the voice of Audrey II, managed the display board.

Putting on a production of this magnitude was truly a team effort. “I’ve been blessed to work with two experienced educators, Rick Leidenfrost-Wilson and Angela Luftig, who have more than thirty years combined experience creating educational theater at The Wheatley School,” said director McKenna. “My musical experience peaked in fourth grade with a failed public performance of “Hot Cross Buns” on a plastic recorder, so I would have been lost without their expert and gentle collaboration.” In the program, McKenna reminisces, “If you were part of your high school play, you know it is an experience you never forget. I applaud and thank Rick and Angela for their years of creating cherished memories for the theater students at The Wheatley School.”