The Nassau County Police Department reports an arrest for Driving While Intoxicated on Saturday, Jan. 31, 2014 at 12:55 a.m. in North Hills.

According to detectives, Vincent Gagliardi of Little Neck was driving above the posted speed limit westbound on the North Service Road of the Long Island Expressway in Roslyn Heights when he was observed by a patrol officer from the Third Precinct.

A car stop was conducted on the North Service Road at Searingtown Road and it was discovered two of the passengers in the car were the defendants 12 and 5-year old sons, detectives added. It was determined Gagliardi was under the influence of alcohol and he was placed under arrest without incident, detectives said. The children were released from the scene to a family member. 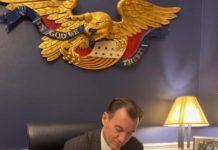