The Roslyn Landmark Society (RLS) will celebrate its 54th anniversary this year. And the popular restoration group has its usual number of interesting events planned for 2015.

“Two thousand fourteen was a momentous year for us with the successful restoration and unveiling of the Mackay Horse Statue in Gerry Park,” said RLS member Anne Tinder in a year-end message. “The 100 year-old marble statue was once part of Harbor Hill, the 648-acre Roslyn estate designed by Stanford White. Our current focus is the restoration of the Robeson-Williams Grist Mill, a national historic landmark and part of the Roslyn Village streetscape for over 300 years.”

“We’re also renovating our headquarters at 36 Main Street in Roslyn; the George Allen Tenant House is a registered historic building built in 1830,” the message continued. “Other restoration projects include the Mackay Gates (the formal entrance to Harbor Hill) and several other initiatives now in the preliminary planning stages.

“In June we will revive our House Tour, once a nationally-acclaimed event, which provides access to the interiors of select, historic homes in the village,” Tinder said. “At the end of the month, we will have our annual fundraiser at the studio of Gertrude Vanderbilt Whitney in Old Westbury which was designed by Delano & Aldrich.” 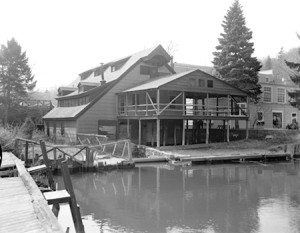 Educational programming, Tinder said, plays an important role in the society. And that means the society monthly lecture series, which combines lectures with audio-visual presentations.

In March, the RLS plans a talk, “Great Yachts of Long Island’s North Shore” by Bob Mackay on his recently published book, at the Port Washington Yacht Club. In April, the RLS will return to Long Island’s Revolutionary War roots with a talk, “George Washington’s Long Island Spy Ring” by Elizabeth Kahn Kaplan.

Finally, in May, Steve Gittleman will give a talk, “The Vanderbilt Legacy.” Exact dates and times and locations of the above talks will be given at a later date.