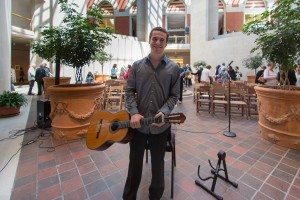 Sherwin, who is a graduate of Roslyn High School and currently a rising senior at Yale University, conducted his well-attended program in the YoungArts Center at The Met.

The concert, part of the YoungArts At The Met program, included works from Johann Sebastian Bach, Joaquin Turina, Ferhando Sor and Andrew York. Sherwin performed with a guitar designed by Ignacio Fleta (1897-1977), one that was first used in 1953 in Barcelona and one that is a gift of The Jonathan & Faye Kellerman Foundation. Both Kellermans, as readers may recognize, are well-known mystery writers.

“It was a terrific experience,” Sherwin told The Roslyn News, adding that using a mid-twentieth century guitar created a whole new different soundscape.

“I fell in love with it,” Sherwin said of the instrument. “It was an amazing performance with an appreciative audience.”

“It was a beautiful venue,” added Sherwin’s mother, Dana, “especially the way Kevin played on that historic guitar. It was an incredible, uplifting and amazing event.”

Sherwin also attended the Julliard Pre-College program for classical guitar studies. The concert series features students, such as Sherwin, who are alumnae of the National YoungArts Foundation.

The concert was also the latest triumph for Sherwin who is becoming recognized as one of the most promising classical guitar musicians in America. Even though he is still an undergraduate, his accomplishments are numerous. The 2014-2015 season, for instance, marks Sherwin’s appointment as assistant conductor of the Yale Russian chorus and the founding of the Yale-based chamber orchestra, The Academy Sinfonietta, of which he is music director.

This year, Sherwin will be touring as both a guitarist and conductor throughout the Northeast, Midwest and West Coast, including concerts in Los Angeles, Chicago, New York, San Francisco, Milwaukee and Boston.

In addition to his musical prowess, Sherwin is also an accomplished conductor. He has been invited to perform concerts as a part of the Yale University Art Gallery, the Long Island Guitar Festival, Chamber Music Without Borders of Montreal and Timothy Dwight College of Yale University. Sherwin recently led the New Haven summer chorus in Fauré’s Requiem. With the Academy Sinfonietta, Sherwin conducted a program of music from the Baroque and Early Classical periods, featuring J.S. Bach’s Cantata #4, Christ Lag in Todesbanden.

For his tireless performing, Sherwin has received extensive honors and recognition, including first prize in the Juilliard Pre-College Guitar Concerto competition, the New York State American String Teachers’ Association Solo competition and the NEMC Concerto competition. He has also received top honors from the Guitar Foundation of America International Youth competition, National Foundation for the Advancement in the Arts and Phi Mu Alpha Sinfonia.

In Roslyn, Sherwin began to study guitar at age 7. In addition to Juilliard, he has studied at the Conductors Institute at Bard College and the Tafelmusik Baroque Summer Institute. He currently studies conducting with Mark Bailey and guitar with Christopher Ladd.