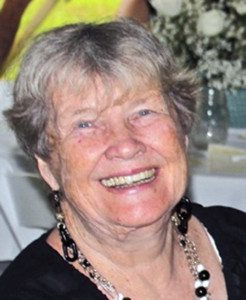 Kathleen Hamilton Gerardi, a former East Hills resident and board of trustee member, died on March 2 at age 77. An exuberant lover of life and family, tireless government official and executive for nonprofit organizations and a passionate believer in fair housing, Kathleen passed away in New York City from congestive heart failure. Gerardi was born in Queens County to Robert Hamilton and Marion Mulqueen. She grew up in Queens and Manhasset, attending St. Mary’s Schools, resided for 27 years in East Hills and lived in Long Beach since 1987.

With her family, Gerardi spent summers at her beloved family home on Kinderhook Lake in upstate New York. She is survived by her husband, retired attorney George R. Gerardi, children and spouses Kathleen and Eric J. Adams, Joseph and Bethany Richardson-Gerardi, Robert and Kyra Buchko Gerardi and Mary Jo and U.S. Rep. Chris Gibson, nine grandchildren, and two sisters and their spouses, Betty Jo and Gerald Schmaedick and Mary and Gerald Howard.

Gerardi spent over 40 years working with county, state, and federal providers of low and low-middle income housing and spent a decade as director of Federal and State Aid for Nassau County. Most recently, Gerardi served as a consultant and director for NeighborWorks America. She was elected trustee for the Village of East Hills and served as an assistant professor and Grants Coordinator for Long Island University. Gerardi earned three master’s degrees, in education from Queens College, in political science from CW Post, Long Island University and in public administration from New York University. She was a dissertation away from her PhD in political science before her death.

Gerardi traveled extensively throughout the world, including numerous trips with family to Asia, Africa, Europe, South and Central America, and the Dominican Republic. Gerardi was a member of St John’s Catholic Church in Valatie, NY, and of Our Lady of the Miraculous Medal in Point Lookout, NY. Gerardi also volunteered with numerous organizations, including Hermandad, Inc., Butterflies USA, Long Beach Interfaith Council, and she was a member of the NAACP.

If you wish to honor the memory of Kathleen Gerardi, the family welcomes donations to nonprofit organizations Hermandad, Inc. (www.hermandad.org) or Butterflies USA (www.butterfliesusa.org).