Some people have a natural inkling of what they want to do in life, even before they can recall their first memory. Local musician Sheri Miller is one of those people.

“I have been writing songs and taking classical piano lessons since I was 8 years old,” says Miller, who was writing songs complete with lyrics that were profoundly deep songs about eternal love. “My mother was an opera singer and classical pianist, so I grew up with music. I’ve had so many magical occurrences in my life that nudged me on my artistic path.”

While studying at UPenn, Miller learned how to play guitar and jazz piano. It was during that time when she began working with different blues artists in the rougher parts of Philadelphia where the real soul music was.

A believer of signs and connected moments in life, Miller has always dreamed of a Casio piano, but her apartment didn’t allow for the space. One Sunday morning, she woke up and felt an urge to walk through campus on her way to the library.

“I passed a church sale and they had a Casio keyboard for $20, which I still have to this day. From that moment on, I felt that becoming a musician was my destiny,” says Miller. “I get so much joy out of performing and I love being able to get everyone to connect with themselves and their own souls.”

After graduating from college, Miller considered attending a conservatory to hone her skills, but instead, went to New York City and played every open mic night that would have her, allowing her to further develop her songwriting voice. Simply put, Miller loves nothing more than the art of songwriting. Having been raised on all of the classic songwriters from Leonard Cohen, Bob Dylan and The Beatles to Joni Mitchell and Carole King, that’s how she learned to write. Miller also studied the work of Gershwin, Irving Berlin and blues and
jazz artists like Ella Fitzgerald, Etta James, Duke Ellington and Marvin Gaye. She says
that those musical genres were big influences in her singing and playing.

“I like artists that connect to love and want to create beauty and positivity,” she says. “Music is a vehicle that we can use to spread love and joy into the world. It just feels like my calling in life.”

Miller, who currently lives in New York City and spends a lot of her time in California as well, recently came home to Roslyn to perform at the Shelter Rock Library and My Father’s Place. And being a hometown girl returning to her roots is where she will always find her biggest support system.

“Playing at My Father’s Place was a true honor. I had heard about the iconic venue for
a very long time…so many legends have played there and to have the honor of playing there myself for a full house was amazing,” says Miller, who did a solo performance with just a guitar and keyboard. “Everyone was so wonderful and kind. I loved playing for my hometown crowd with my parents in the audience.” 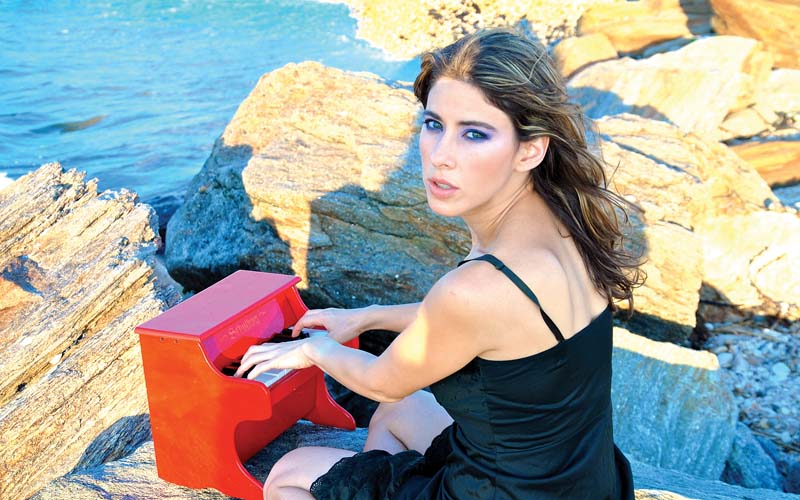 Extremely appreciative of her upbringing on the North Shore, Miller gives kudos to Roslyn’s education system and teachers that care about their students.

“I was a runner (I had the best coach in Mr. Fried) and was part of the poetry club, kind of figuring out where I fit in as an artist in a very academic environment,” says Miller. “I also loved Helene Fisher, she was my fifth-grade teacher at Harbor Hill School. She really believed in me and the brilliance of all of her students. She expected greatness and was very supportive and wonderful.”

The artist considers it an honor and a real privilege to have grown up in Roslyn, a town rich with history, and she is much more appreciative of it now.

“I feel like I am being championed by this town; it’s in my roots,” she says.

Miller has spent the past few months recording in New York, Los Angeles and Nashville as she readies to release her songs, which range from timeless and classic to more modern, intimate and confessional styles. She equates herself to a mad scientist when writing songs, noting that she switches back and forth and often writes multiple songs at once. But even when she is in the zone, she always counts her blessings.

“I appreciate my fans and I feel very blessed, very lucky and supported,” she says of her ability to communicate through music. “I hope to inspire more artists and songwriters to believe in their dreams.”