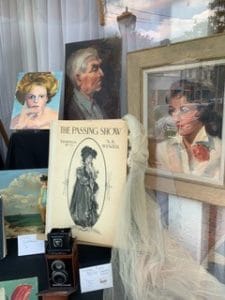 Have you passed by the Junior League of Long Island’s Thrift Shop in Roslyn recently? All of the artwork and vintage items in the window were donated by the Serreze/McIntire family of Woodside, NY. Susan Serreze is a sustaining member of the Junior League of Denver, Colorado. Many of the items are more than 100 years old and belonged to many generations of the family of the late Marjorie Patricia McIntire (Pat), Susan’s mother.

About the artwork – Susan’s great grandfather, William H. McIntire, was a professional artist, illustrating articles and advertisements for publications such as the Ladies Home Journal.

Susan’s grandparents, Carlton Dinsmore McIntire (Mac – portrait on easel) and Marjorie Hull (portrait on easel) were also professional artists.   Mac studied at the Art Institute of New York, where they met, and Marjorie Hull at Pratt Institute. They both worked as commercial artists until the depression, Marjorie in Pen & Ink, Oils, Watercolor, and Cartoons, Mac in Pen & Ink and Oils.

The Junior League of Long Island sends its condolences to Susan Serreze, a and her family, on the passing of their mother, Marjorie Patricia McIntire (Pat) of Woodside, NY.

The Junior League would also like to give a special thanks to Susan and her family for their generosity in donating the contents of this window and providing the history of the items.