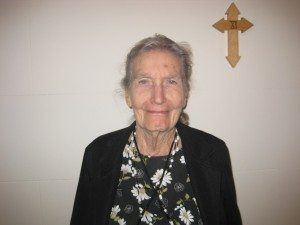 Isabel Davidge Glomb, resident of Roslyn Heights for over 50 years, died on June 10, 2015, at the age of 98. She was also a longtime parishioner of Trinity Episcopal Church in Roslyn.

Isabel was born in Ballston Spa, NY, on March 18, 1917. She began her education in a one-room schoolhouse and went on to graduate from the New York State College for Teachers in Albany in 1937 and to receive an M.A. degree from Middlebury College in Vermont in 1945. On July 11, 1953 Isabel Butler Davidge married Ludwig Vincent Glomb, who preceded her in death in 1996.

Isabel was a dedicated high school English teacher for over three decades from 1937 through 1972 in the Sacket’s Harbor, Mattituck, and Hewlett school districts. At Trinity, Mrs. Glomb was active in parish life and head of the altar guild for many years. In recognition of her long and distinguished service to Trinity Church and the Diocese of Long Island, Isabel was awarded the Bishop’s Cross in June 1987.

In retirement, Isabel and Lou combined their love of travel, adventure, and learning by attending several Elderhostels where they explored history, nature, arts, music, and numerous other subjects. Isabel continued to draw, paint, and play the recorder well into her nineties. She volunteered her time and contributed to several charitable organizations, including delivering Meals on Wheels to “the old folks,” many of whom were younger than she was.

The funeral service for Isabel will be held on Saturday, Aug. 22 at 11 a.m. at Trinity Episcopal Church, 1579 Northern Blvd.

In lieu of flowers, donations may be made to Trinity Episcopal Church or to a charitable organization of the individual’s choosing.