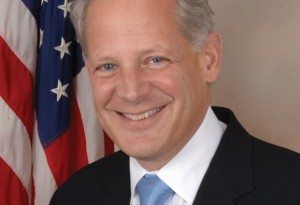 As to be expected, members of the Long Island congressional delegation had plenty to say about last week’s agreement between Iran and six major world powers, including the United States, on the former’s nations nuclear program. In brief, the agreement, which is subject to a congressional vote, lifts certain sanctions on the near East nation, while subjecting it to lengthy curbs on its nuclear program. And as also to be expected, there was little enthusiasm for the agreement and plenty of disagreement. The Long Island delegation has four members, evenly divided between Democrats and Republicans. Rep. Steve Israel (D-Huntington), represents the Roslyn area in Washington. He reiterated his skepticism to the agreement.

“I was skeptical at the beginning of this process, and I remain skeptical of the Iranians,” he said in a statement. “In the fall, there will be a vote on this deal, and my obligation is to review every word, sentence, and paragraph of the deal to ensure it satisfies my continued concerns. Until then, you can continue to count me in the ‘skeptical’ column. I want to recognize the leadership of the Obama Administration, Secretary Kerry and the countless U.S. officials who worked tirelessly on these negotiations, and I look forward to examining every detail of the agreement.”

Rep. Peter King (R-Seaford) is the dean of the Long Island delegation, having first been elected in 1992. Not surprisingly, he was against the agreement. Speaking on a radio talk show, King maintained that the agreement, “basically locks in place Iran’s nuclear program, so even if they fully comply with the agreement at the end of 10 years, they’re only going to be one year away from having a nuclear bomb.” As with other critics, King claimed that the agreement could set off an arms race between Iran and its Middle East rivals, namely Saudi Arabia. Toward that end, the congressman also took issue with a segment of the agreement that would lift an arms embargo on conventional weapons after five years, while doing the same on intercontinental ballistic missiles after eight years.

Zeldin agreed with King on the possibility of an arms race in the Middle East. He also disagreed with the Obama administration that any alternative to an agreement was possible war with Iran.

The President stated that the only alternative to whatever deal he entered is war,” Zeldin noted. “I reject that. We could have done better at the negotiating table,” adding that, “The President should have walked from this bad deal and strengthened his hand if later he chose to reengage.”

Prior to the agreement, Rice co-authored an op-ed column, one that called for any agreement to contain “aggressive inspections and verification protocols.” Rice also claimed that the lifting of economic sanctions should be done so “gradually.” Finally, she maintained that any agreement would result in eliminating Iran’s “routes to a nuclear bomb, not merely [obstructing] them for some period of time.”

Rice, as of press time, has not made any public statement on the agreement.