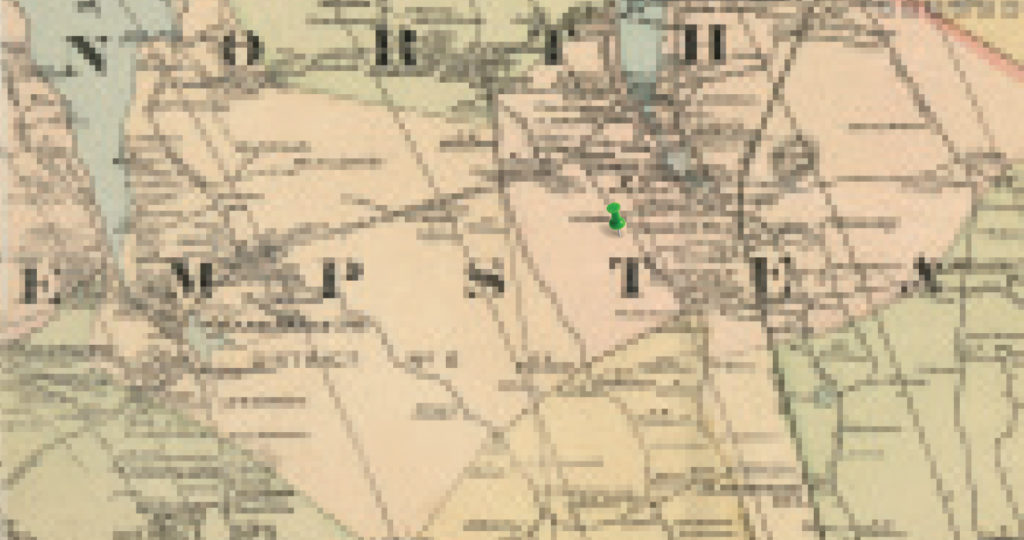 Back in the mid-1960s, urban renewal was all the rage in America. The nation was flush with cash and certain urban areas were now considered a blight on this prosperous country. Entire neighborhoods in cities large and small across the United States were bulldozed and replaced by super highways, public housing and commercial development.

Urban blight in little Roslyn? It doesn’t seem possible. Still, the area was targeted. Federal authorities apparently reasoned that Roslyn’s proliferation of centuries-old homes were a blight. They, too, were to be bulldozed in place of public housing. Roslyn, as longtime resident Les Arstark once said, was becoming a slum. Enter the enterprising couple of Dr. Roger and Peggy Gerry. These newcomers to the village had decided to set down stakes here. They were also determined to prevent the village’s deterioration. And they succeeded. By helping to form the Roslyn Landmark Society, the Gerrys and other local patriots were able to gain historic status for homes and indeed, an entire district. In 1984, then-First Lady Nancy Reagan solidified Roslyn’s national reputation by declaring the village as a model for historic preservation.

To celebrate Roslyn’s achievement, the society hosts an annual house tour every June, one that also showcases these many historic homes. Step back to discover houses, some of which predate the founding of America itself. 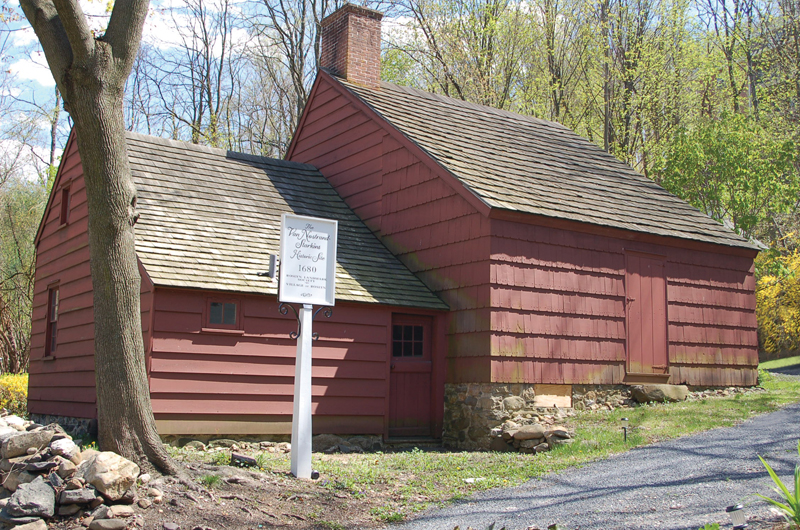 This is the granddaddy of historic homes in Roslyn. Research estimates the house was constructed around 1680. According to the society, the house, originally, was over 20 ft. in length and 16 ft. wide with a large masonry fireplace. From the 19th century on, the house was owned by, first, the Starkins family and later, the Kirby families. In 1966, the Village of Roslyn acquired the property. From 1973-1977, the Roslyn Landmark Society undertook a major restoration of the property The house serves as a museum, containing “an important collection of American, particularly Long Island-made furniture and decorative arts.”

Cedarmere, the home of William Cullen Bryant, is the literary capital of Roslyn. Built in 1824, Bryant, then editor of the New York Evening Postscript, purchased the home in 1843. Richard Kirk, a Quaker farmer, constructed the original section of the house in 1787. When Bryant took ownership, he enlarged the house, “adding outbuildings and developing the grounds into a horticultural showplace,” society members note. The poet/journalist also expanded his holdings by acquiring 200 acres of land. That included the Fine Arts Museum grounds, since renamed the William Cullen Bryant Preserve. Following his death in 1878, the property passed through Bryant’s descendants. In 1902, a fire nearly destroyed the main house. Bryant’s grandson, Harold Godwin, restored the house, which today is open for tours, while hosting poetry readings, holiday parties and offices used by counseling centers. Interest in Bryant has picked up over the years, with the Roslyn Viaduct being renamed for him and an historical marker standing outside of the estate’s residence.

Complementing the Cedarmere estate is its mill. The 1787 Mill burned in 1849 and was replaced by William Cullen Bryant in 1862. The Bryant Mill, society members claim, was most likely designed by Frederick S. Copley, an active area architect in the Gothic Revival style. “The mill is considered unique in that it is the only surviving example of a mill in the Gothic Revival style which also has the first floor designed for use as a summer cottage,” society literature states. “The mill works supplied power for machinery such as lathes, saws, grindstones and other tools needed to run the Bryant estate. The mill was originally powered by a water wheel but in 1885 Bryant’s daughter Julia replaced it with a turbine drive.” The mill was recently restored by the Gerry Charitable Trust in cooperation with the Landmark Society and Nassau County Department of Parks and Recreation.

Prior to World War II and the rise of suburbia, Roslyn—and the rest of Long Island—was known for its odd mixture of sprawling estates, potato farms and workers who tilled on those estates. The most famous estate was Clarence Mackay’s Harbor Hill Estate in East Hills. The Harbor Hill Water Tower also known as the Mackay Water Tower was designed in 1899 and built in 1900-1902, as a component of that estate. “The water tower is an important survivor from the period when much of Long Island was developed with great estates,” the society literature said. “The water tower is significant as a handsome utilitarian structure, reflecting the fact that every aspect of estate design and planning was carefully considered by the owners and architects involved.

One of the most important attributes of the tower, society members added, is its black slate roof. The form of the roof, in combination with the random ashlar walls, has led to conjecture that the tower’s design is based on the Belgian model, although this has not been verified. This, of course, would represent a departure of the French influences guiding the design of Harbor Hill itself. 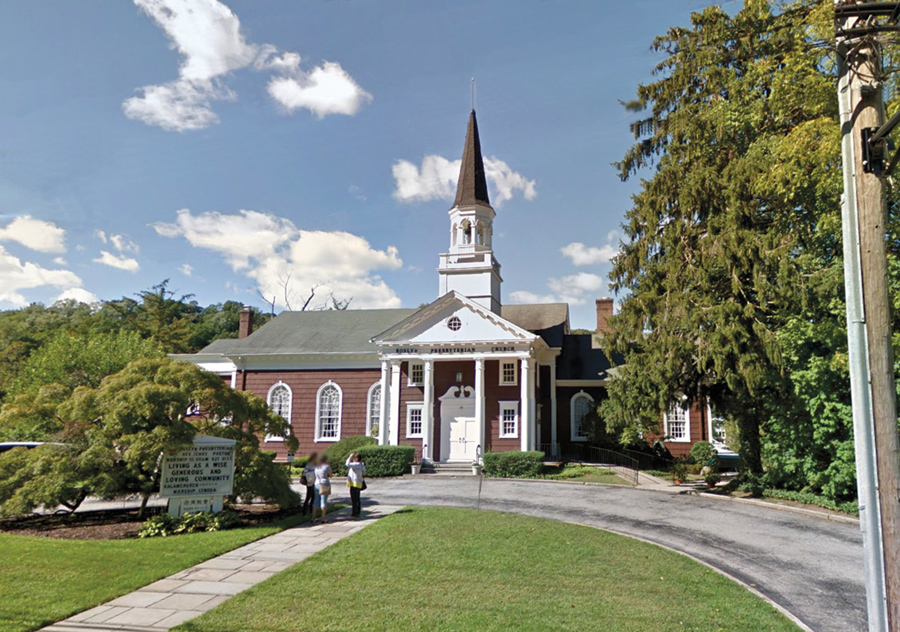 We end our journey with one of Roslyn’s most durable religious institutions. The current Presbyterian Church was built in 1928. The original church, however, was constructed in 1858 at 35 East Broadway. William Cullen Bryant attended services at the original site and his wife Fanny was baptized by Dr. Samuel Rose Ely. The original building was eventually turned into a private, residential home.

The symbol of Roslyn is the Ellen E. Ward Clock Tower. William Cullen Bryant’s career is steeped in Civil War history and this grand tower is also a legacy to that bloody conflict. The tower, society members observe, was commissioned by her children and dedicated to her memory in 1895. Ellen Eliza Cairnes Ward was born in 1826 and grew up in Roslyn. She married Midshipman Robert Stuart, USN, in 1848. The couple had three children and resided in Roslyn Harbor. Lt. Stuart resigned his commission in 1857 and died in 1863. Ellen Ward was deeply involved in the Roslyn community. She dedicated a window in Trinity Church in memory of her husband and in 1885 she donated the Roslyn Watering Trough, which is located on the triangle at the intersection of Old Northern Boulevard and Bryant Avenue. This newspaper played a key role in promoting the construction of the tower until its completion in 1895. A century later, a grand renovation project took place. One of the clocks on the tower was inoperable. Morris Welte, stepfather of Janet Galante, soon to be the village’s first female mayor, worked to fix that clock and a new life for the tower was underway. Everyone loves the clock tower. Christmas caroling and tree lighting take place here. The start of a 5K run through the village starts there. The Roslyn High School homecoming parade makes its way past the attractive stone monument. Local residents can hike up its stairs to take in a panoramic view of Hempstead Harbor. Today it is maintained by the Village of Roslyn. A descendant of the Ward family, Marshall Ward volunteered interior carpentry restoration in 1995.

Here is another surviving piece of architecture that predates the founding of the republic. The 1773 Paper Mill was established by Hendrick Onderdonk. That matters, too. Onderdonk was an heir to one of the Roslyn’s most prominent families. During the Revolutionary War, Onderdonk performed valuable espionage services for the Continental Army, so much so that George Washington, while on his triumphant victory tour of Long Island, stopped by the Onderdonk House in downtown Roslyn for a visit. More history. The structure was the first paper mill in New York State and one of the first of its kind in the 13 colonies. In 1801, Onderdonk sold the mill to William Valentine. The Valentine family then operated the mill until 1896, when it stopped production. The mill remained drenched in American history right to the end. First, George Washington. At the end, Grover Cleveland. The last mill product was a set of pasteboard cake boxes for Cleveland’s June 1886 wedding. Historic preservation didn’t begin in the 1960s. In 1915, the Roslyn Neighborhood Association erected the present building to conform to the original. Today, it is owned and managed by The Town of North Hempstead.