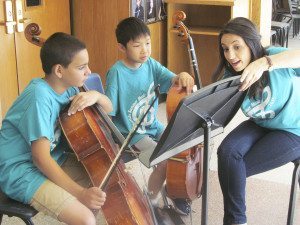 Each morning over the past few weeks, the halls of Herricks High School have been filled with the sound of music as grade schoolers sharpen their skills as instrumentalists and singers in the Herricks Summer Music Program.

The program, now in its sixth year, has grown from 30 students in its first year to 78 in the current month-long session. The students in the program are in grades 4 through 8 and have at least one year playing an instrument.

Anissa Arnold, director of music and performing arts, said the summer program aims to improve their musicianship and expand their musical experiences.

“It’s enriching to the students. It keeps then playing over the summer,” Arnold said. “They have fun and it keeps them improving.”

The summer program was Arnold’s brainchild. She’s maintaining it this summer with the help of three of the district’s music teachers and 16 student counselors who are all members of the Herricks Tri-M Music Honor Society. The counselors include Herricks High students and alumni in college who come back each summer to help out.

The student teachers help to teach courses and give individual instruction to the young students enrolled.

“I like kids. It’s a lot of fun. It reminds me of what I had to do to get there,” said Esme Chen, who is going into her sophomore year at Herricks High and has been playing violin since she was in first grade.

One of the young violinists she’s mentoring, Addison, starting fourth grade at the Denton Avenue School this fall, has been playing since she was three years old.

“She’s very nice and she helps me do better,” Addison said.

Along with orchestra, band, chorus and the individual tutoring, the grade schoolers can select electives, including musical theater, rock band, guitar and a new course in world music. As the course selection and student enrollment has expanded, the cost of the summer program has remained $325 for the summer music program since its inception.

“You get to learn new things. And all of our teachers are so nice to us,” said Rachel, who is learning guitar as she prepares for her first year in the Herricks Middle School.

Some of the counselors were also students in the program who say they enjoy giving something back.

“I like helping kids progress the way my counselors helped me. I learned to appreciate music from this program,” said Aagarshan Gupta, a sophomore who plays trombone, trumpet, French horn and guitar.

“It feels good if you accomplish something. I know jazz. I know improve. I know a lot more stuff,” said Aagarshan’s younger brother, Achintyaa, who is in the program for the first time as he heads into
ninth grade.

John Sanelli, a junior who plays double bass in the high school orchestra, was a student in the summer program for three years and is in his third year teaching in it.

He said he enjoys the relaxed atmosphere of the music camp. “I think it’s nice because it’s not a conservatory,” Sanelli said.

In one of the practice rooms during a recent morning session, Herricks alumnus Emily Buckley, is teaching her class of grade schoolers in world music about the subtleties of playing a conga drum.

“Close your eyes and open your ears,” she tells them. And they respond, as she calls on them to repeat the rhythm patterns she plays.

The conga is one of several instruments she’s introducing to her world music students. She’s also teaching musical theater and chorus this summer.

“It’s been amazing. It’s been a special experience that’s very unique,” said Buckley, who just graduated from the Crane School of Music in Potsdam and will be teaching chorus in the Syosset School District this fall.

“I love it. The kids are great. We give them challenging music and it’s amazing the way they progress,” said Samantha Madonna, who is in her third year of teaching elementary orchestra in the Manhasset School District.

Jesse Torres, a junior majoring in music education at SUNY at Fredonia, said he’s happy to apply things he learns at college to the summer program, where he’s been teaching for five years.

“It’s so much fun. I have a blast doing it,” Torres said.

The students are also clearly having a blast honing their skills and gaining new ones, like learning to play by ear in the rock band course.

“It’s a lot more laid back than in school. This only happens in summer music. It’s really fun,” said Geoffrey Tayor, a band teacher in Herricks, at the conclusion of a rock band session.