Now that the Roslyn Bulldogs football season is over, let’s review some final numbers for that championship season.

Through the air, Combs connected on 35 completions for 548 yards and 13 touchdowns, truly amazing numbers for a freshman and one that included the championship-game winning fourth down aerial to Isaiah Hunter, which proved to be the margin of difference in the Bulldogs’ 15-14 win over Port Washington in the “top team” classic game two Saturdays ago.

Hunter was Combs’ favorite target all year long as the senior star had 19 receptions for 349 yards and eight touchdowns. All-around star Thomas Davis had nine receptions for 61 yards, while Alex Epprecht chipped in with six receptions for 108 yards.

This year’s Roslyn squad was old-fashioned in that it had several “60-minute men,” that is players who starred on both offense and defense. Chris Snipes, for instance, was not only a force on offense, he also had five quarterback sacks and three fumble recoveries. Alex Epprecht had three interceptions and two fumble recoveries. In addition to his offensive heroics, Isaiah Hunter had two interceptions and a fumble recovery. Jeremy Kaplan, who was Roslyn’s ace place kicker, also had two interceptions. Head Coach Mike Corcoran would like to see more youngsters come out for football, since the Port Washington squad had significantly more players on the bench than did the Bulldogs. A shorter bench did not prevent Roslyn from winning, but a team with more depth can take a load off of the offensive players.

This year, Roslyn has to say farewell to many fine senior stars, including Hunter and Epprecht. However, the Bulldogs will see stars Combs and Davis returning for the 2014 campaign. With Adam Combs returning only as a sophomore, Roslyn fans can look forward to many fine winning seasons in the future. 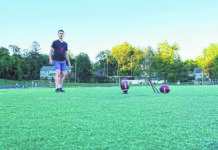