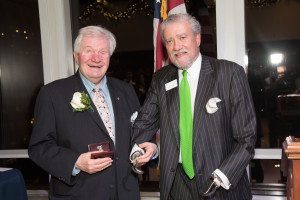 “Every day people with disabilities are leaving their mark in communities all over the world, and their work often transcends the geographical boundaries of where they live,” said John D. Kemp, president and CEO of The Viscardi Center. “This year’s award recipients are a dedicated, diverse and trend-setting group that reminds us all that our work can be far-reaching and does make a meaningful difference in the lives of others.”

The 2015 award recipients include:

• Mark Johnson, chair of The ADA Legacy Project and director of Advocacy at Shepherd Center

The recipients were honored for an array of impressive achievements, including work in the fields of education, employment opportunities, health care delivery, rehabilitation and advocacy. This year marks the 25th anniversary of the American Disabilities Act (ADA), a piece of legislation that one of the recipients, Mark Johnson, played a major role in getting passed.

Other achievements are just as praiseworthy. Probably the most famous recipient is Ed Lucas. In his youth, Lucas lost his eyesight in a sandlot baseball game activity. But that didn’t prevent him from having a landmark career in journalism. Lucas was the first graduate of the Seton Hall journalism program, and the first professional sports broadcaster and journalist, with a disability. He is also the co-author of the best-seller, Seeing Home: The Ed Lucas Story. He established The Ed Lucas Foundation as a way to give an assist to others who are blind and/or disabled.

Every year, Roslyn High School hosts a benefit concert for the charity group, Wounded Warriors. One of the founders of that popular organization was Lonnie C. Moore. Moore is a United States Army veteran who lost his right leg in combat in Iraq. According to Viscardi officials, Moore has conducted peer visitations to hundreds of service and civilian amputees, trained and certified hundreds as amputee peer mentors and guided career and education readiness programs. Viscardi officials added that the multiple services Moore has implemented have provided a road map for over 60,000 wounded soldiers to transition from the military to employment and meaningful civilian life.

Finally, the awards ceremony does more than honor worthy recipients. It also serves as an occasion to remember the spirit and legacy of the center’s founder, Dr. Henry Viscardi, Jr., who himself wore prosthetic legs. As one of the world’s leading advocates for people with disabilities, Viscardi served as a disability advisor to eight U.S. Presidents, from Franklin D. Roosevelt to Jimmy Carter. The most recent awards ceremony proves that his legacy remains as vital as ever.

For more information about the awards, visit viscardicenter.org.