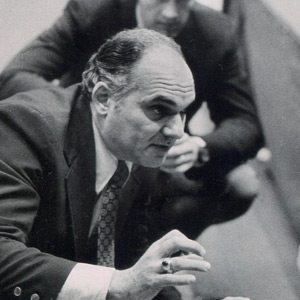 Roslyn High School basketball is in the news everywhere. Both the boys’ and girls’ varsity squads turned in late season runs to make the playoffs in Conference A-II action. At the same time, George Beamon at Manhattan College and Mark Gjonlekaj at Old Westbury have taken the game they learned in Roslyn to stardom on the college level.

And there’s more. In March, the most legendary figure in modern Roslyn High School basketball will receive the greatest honor of his illustrious career. On Sunday, March 16, Joe Lettera will be inducted into the New York State Basketball Coaches Hall of Fame. A luncheon and ceremony will take place on that date at the Heritage Hall in the Glen Falls Civic Center, Glen Falls.

“It is both electrifying and humbling to be selected for the most prestigious honor that can be given to a basketball coach,” Lettera told The Roslyn News. “It is humbling because I have seen many fellow coaches and even some of my players pass away. Therefore, I appreciate the time and opportunity to receive the Hall of Fame award. Most of all, thank you to every boy who played on my teams. They had talent, intelligence and were resourceful. Thank you to the administrators, teachers and coaches of Roslyn Public Schools. Also a very special thank you to my lovely wife Janice.”

Lettera is one of the nine coaches to be inducted this year. He has been selected on the strength of over 30 years of coaching at Roslyn High School. From 1958 to 1989, Lettera coached the Bulldogs, winning 405 games, while losing 210, for an impressive .668 winning percentage.

His many honors include:

In 30 years of coaching, Lettera had 28 winning seasons. His Bulldogs won seven division titles and twice made it to the Nassau County finals in their division. With his induction, Lettera will join the company of such coaching legends as Joe Lapchick, Nat Holman, Red Holtzman, Lou Carnesecca, Frank McGuire, Billy Cunningham, Dolph Schayes, Larry Costello and Jim Boeheim.

Lettera is the ninth-winningest coach in Nassau County high school basketball history. He obviously coached many great teams and great players. One such team was the 1960 squad, whose center was Michael Crichton, who later achieved international fame as a novelist and screenwriter. In a 1996 profile in Newsday, Crichton, while visiting his alma mater, remarked that Lettera was a “young coach…who grew up in a tough neighborhood. He told us, ‘We’re going to build character through winning.’ That was the spirit at the time. So I wanted to come back again and see where I came from.”

Lettera, for his part, called Crichton one of the five best players he ever coached, including the best center he ever had.

Lettera now lives in Macungie, Penn. But he fondly remembers his many years in Roslyn and there are undoubtedly many Roslyn residents who will be delighted to learn of Lettera’s well-deserved honor.