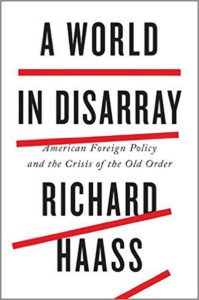 Political junkies who tune into “Morning Joe” each morning on MSNBC are often treated to the foreign policy expertise of Roslyn Heights native Richard Haass. The president of the prestigious Council on Foreign Relations (CFR) and a former official in the U.S. State Department, Haass is also a prolific author. His most recent book, A World In Disarray, refers not only to a crisis of the “old order” that came into being after World War II, but a similar order that arose when the Cold War ended.

The publisher’s note for the book paints a bleak picture of the world scene, invoking a line from William Butler Yeats’s “The Second Coming.”

“Things fall apart; the center cannot hold. The rules, policies and institutions that have guided the world since World War II have largely run their course,” it claims. “Respect for sovereignty alone cannot uphold order in an age defined by global challenges from terrorism and the spread of nuclear weapons to climate change and cyberspace. Meanwhile, great power rivalry is returning. Weak states pose problems just as confounding as strong ones.

The United States remains the world’s strongest country, but American foreign policy has at times made matters worse, both by what the U.S. has done and by what it has failed to do. The Middle East is in chaos, Asia is threatened by China’s rise and a reckless North Korea, and Europe, for decades the world’s most stable region, is now anything but…The election of Donald Trump and the unexpected vote for “Brexit” signals that many in modern democracies reject important aspects of globalization, including borders open to trade and immigrants as well as a willingness to maintain alliances and overseas commitments.”

Haass argues that although America needs to maintain a preeminence in the world, a 21st century world order would reflect such realities as power being widely distributed and borders “counting for less.” The world, the author claims, cannot have stability without the United States, but the U.S. cannot be that force without “reaching a new understanding,” namely that the nation needs to confront its nagging domestic problems such as “dysfunctional politics” and the national debt. This coincides with a thesis Haass made in a 2014 book, Foreign Policy Begins At Home, which he argued that foreign policy challenges are intertwined with domestic problems, which Haass identified as not just massive debt, but “crumbling infrastructure, second-class schools and an outdated immigration system.” In short, America’s ability to lead the world depends on its success in getting its own house in order.

In a 2015 interview with the BBC, Haass offered his opinions on recent American military actions, where he warned against “consistency” in foreign relations. Haass said that the 2003 invasion of Iraq was “ill advised,” but that the withdrawal that took place a decade later was faulty as well. He maintained that both the U.S. and the U.K. waited too long to intervene in Syria, allowing the Islamic State (ISIS) to gain a foothold there. Similarly, the war against Libya in 2011 was a mistake, Haass said, because the Libyan people are even worse off than they were when Muammar Gaddafi was in power. Haass called for a “custom-fit” approach to foreign relations, opposing both a consistent interventionism and consistent non-interventionism, but also one that acknowledges that the United States will have to limit its involvement in both “wars of choice” and humanitarian exercises.

Haass has degrees from Oberlin College and Oxford University. He has worked in both the Department of Defense and Department of State. From 1989 to 1993, he was special assistant to President George H. W. Bush and National Security Council senior director for Near East and South Asian Affairs. During the administration of George W. Bush, Haass was both a Special Envoy for Northern Ireland and the director of Policy Planning in the Department of State. He has been president of the CFR since 2003. Haass is the author of 12 books, including The Reluctant Sheriff and The Opportunity.