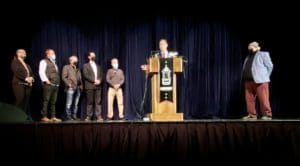 Congressman Tom Suozzi held a press conference last week at the Landmark on Main Street in Port Washington to discuss how the Shuttered Venues Operators Grant (SVOG) program will help deliver financial assistance to entertainment venues, which have been forced to keep their doors closed for more than a year due to the pandemic.

The Shuttered Venues Operators Grant is a $16 billion program that aims to help shuttered venue operators impacted by the pandemic. At least $2 billion is set aside for small venue operators that have fewer than 50 employees. The grant amounts will vary, depending on when a business began operations, but operators will likely receive up to 45 percent of their pre-pandemic gross received revenue, or $10 million, whichever is less. The application process, which allows venue operators to apply for loans through the program even if they have previously received funds from the Paycheck Protection Program, begins on April 8.

“The effects of this pandemic have been cruelly uneven with one of the hardest-hit sectors being live entertainment venues, performing arts organizations, independent movie theaters and cultural institutions,” Suozzi said during the press event. “The Shuttered Venue Operators Grant program, which was expanded by The American Rescue Plan, will deliver a desperately-needed lifeline that will breathe life once again into our local entertainment industry.”

Business owners and directors from some of Long Island’s live entertainment venues attended Suozzi’s press event including Laura Mogul, Executive Director of Landmark on Main Street, Jim Condron, Stephen Ubertini, two of the four owners of The Paramount in Huntington; Kevin O’Neill, owner of the John Engeman Theater in Northport and Michael Epstein, owner of My Father’s Place in Roslyn.

Laura Mogul, executive director of the Landmark on Main Street, stated that she was grateful that Congressman Suozzi has continued to advocate for arts and entertainment venues throughout the pandemic.

“It was important to us at Landmark that even with all of the other major issues like the stimulus—he’s still there plugging for the entertainment industry that is so important on Long Island,” Mogul said. “We were pleased that he chose Landmark as the place to make that statement. It gives us a stage to make the points we need to make about our industry.”

According to a study by Suffolk and Nassau County on the economic impacts of COVID-19, the hospitality industry lost 82,000 jobs as a result of the COVID-19 pandemic. Mogul stated that the money the Landmark has received through loans thus far only accounts for last years lost wages.

“All of the funding that’s been happening—that’s going to help make us whole for the past year,” Mogul said. “It’s going to take a year for us to come back to normal and we’re going to need more support. We are looking for New York State to step up in their budget and for the Federal Government to continue to help support us. All of the money we talked about in that press conference—that’s just catching up to where we are now.”

Mogul explained that if they sell a pair of tickets, there must be six feet of distance between each pair of ticket holders. If everyone bought tickets in pairs, the Landmark would only be able to fit 72 people in the orchestra and 20 in the balcony, which only ads up to 92 people. This small number of ticket sales would not generate enough money to operate efficiently.

Despite the inability to have indoor performances, the show must go on. Mogul is hoping that a slow transition to reopening will make audience members feel more comfortable coming back into a theater.

“Our mission as a nonprofit is to bring the arts to as much of the community as possible,” Mogul said. “We know that people trust us to put on a good show and to take care of them and we want to deliver on that promise.”

The Landmark is continuing to offer virtual programs like they have since the start of the pandemic. They are also beginning their live outdoor concert series on May 15 with Saturday evening shows for adults, and children’s shows in the afternoon. On April 21, the Landmark is also going to be offering their Afternoon Tea program for seniors with a limited number of live audience members. Registration for the event will be held in advance and social distancing and all COVID protocols will be followed.

For more information on events taking place at the Landmark on Main Street, visit www.landmarkonmainstreet.org.

Applications for the SVOP will be taken on a rolling basis, with no deadline and priority will be given to businesses that report the greatest loss. Business owners should visit www.svograntportal.sba.gov/s/ for more information and to review application materials.

—Additional information provided by the office of Congressman Tom Suozzi