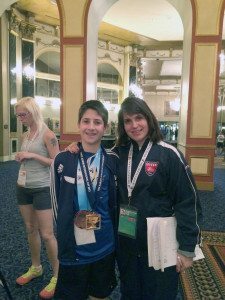 Additionally, Wachsman received two bronze medals, one for his individual performance and one for Team Kumite, at the U.S. Open. Wachsman had the opportunity to compete against the most advanced boys his age from the United States, as well as top competitors from Venezuela, Brazil, Mexico, Slovakia and Canada, to name but a few of his opponents’ countries of origin. His teammates from Tokey Hill Martial Arts, Calogero Torreta and Ashley Davis had similarly enviable performances. Torreta was awarded an individual gold medal at the North American Cup and a silver in the U.S. Open, losing only to the two-time world champion from Brazil. Davis also was awarded an individual gold medal at the North American Cup. With guidance and intense training from Sensei Christina Muccini, the athletes are vying for coveted spots on the U.S Junior and Senior National Karate Teams, to be determined at team trials in Fort Lauderdale, FL this July. Muccini is herself a former national champion and a fixture on the U.S.A. karate coaching.