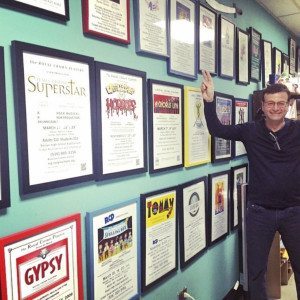 The closing night of the Roslyn High School Royal Crown Players’ wonderful production of In the Heights on March 28 was also the last in the career of Brad Frey, who plans to retire at the end of the school year.

Through 32 seasons and several dozen theatrical productions as musical director, not to mention hundreds of high school concerts, graduations and special events, Frey
has been in the pit, at the piano or on
the podium.

In a message to the outstanding cast and crew before last week’s final performance, he stayed in character by crediting them with his success: “For each and every member of this club that was involved in my 167 performances I say, emotionally, thank you for the opportunity to grow and become a better director. As I sit behind the stage and watch everyone do their jobs, get to assignments, cues or just hanging out by the big screen and enjoying your fellow actors on stages, it is a show in itself.”