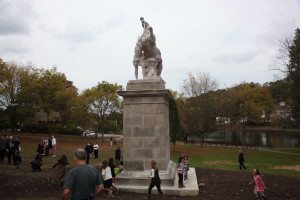 Two years ago, the Town of North Hempstead unveiled the Mackay Horse Statue in Gerry Park. The unveiling, despite cold weather, was a gala event, with numerous local dignitaries in attendance. Now, the town is getting involved again in the park. The town board recently approved a capital project plan which includes a $71,000 Nassau County Community Revitalization Project grant for the statue in Gerry Park, located on Main Street and Paper Mill Road in Roslyn.

According to town officials, the project will include the design, development and construction of a plaza, including a terrace, decorative benches, historic markers, benefactor plaques and winter protection for the statue. During the winter months, Gerry Park is a favorite destination for children in the Roslyn area and their parents as a place to enjoy the snow by sledding down the steep hill. However, that park now has the imposing Mackay Statue and there have been safety concerns over youngsters and their speeding sleds. And so, the town spokesman added that the proposed winter fence will protect any people sledding in the winter from getting too close to the statue. The project is slated for 2017.

“The winter snow fence is preventative,” a town spokesman said. “No one has had a sledding accident as far as we know. We are being proactive.” The spokesman added that there are no renderings of the proposed work yet.

The spokesman added that the The Roslyn Landmark Society “has taken a deep vested interest in restoring this statue and making sure it is properly taken care of.” The society, the spokesman said, has been working on the restoration for a number of years. There is another Roslyn connection to the project. Howard Kroplick, an East Hills resident and published author on several books on Long Island history, is also a member of the society. Kroplick worked with both the town and the society to bring the funding plan into fruition.

“The planned enhancements surrounding the Mackay Horse statue are poised to make this sculpture the centerpiece of Gerry Pond Park,” said Judi Bosworth, the town supervisor. “Residents will have the opportunity to sit, reflect and enjoy the history and culture embodied by this beautiful piece of art.”