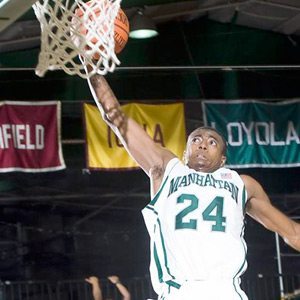 After suffering a shoulder bruise, Roslyn resident George Beamon is back in action for the Manhattan Jaspers, while hardly missing a beat in his usual stellar style of play.

On Friday, Jan. 24, Manhattan defeated Rider College, 67-51. Beamon was back in gear, playing 33 minutes and scoring a team-leading 21 points. The Jaspers jumped out to a 33-17 first half lead and never relinquished their advantage.

In another home game played two days later against Quinnipiac, Manhattan came back from a first quarter deficit to tie the game in regulation, but only to lose in overtime, 90-86. Beamon played 37 minutes and scored 12 points.

The Jaspers will play eight games in February and one in March before the 2014 Mid-Atlantic Conference (MAAC) playoffs begin.

Meanwhile, another Roslyn resident, Mark Gjonlekaj continued to play productive ball for SUNY Old Westbury. Fresh off of being named the Skyline Conference’s Rookie Of The Week, Gjonlekaj scored 18 points with four blocked shots in the Panthers 70-53 win over St. Joseph’s.

Four days earlier, on Saturday, Jan. 25, Old Westbury jumped out to a big 49-31 lead over Sage College to hold on for a 76-68 win. Gjonlekaj scored nine points in this contest. On Friday, Jan. 31, the Panthers ended the season in disappointing fashion, losing to Mt. Saint Vincent, 78-68.

Gjonlekaj had eight points in the loss.
As off press time, Old Westbury is playing 12-6 ball, as the season moves into the final month.