From Television To The Classroom | Roslyn News
Wednesday, May 25, 2022 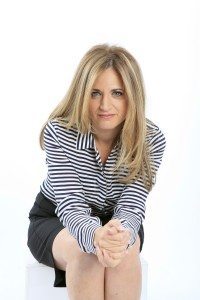 As a stay-at-home mother you are friendly with everyone. You socialize on a superficial level with so many parents, but very rarely I find do you get into deep conversations about the past. This was the case with Roslyn resident, Natalie Mashaal.

In 1991, Marshal graduated with a BA in speech communications from the University of Illinois, with a concentration in interpersonal communications.

“Oddly enough, that is what I teach now at LIU Post, which is funny because when I graduated I thought: ‘What am I going to do this with this degree?’” said Mashaal. After graduating, she landed a spot working for The Oprah Winfrey Show in Chicago for two years.

“This is the job that set me up,” she said. “I was like a kid in a candy store soaking everything up around me. I worked with the hardest working and smartest people.”

Unfortunately, it came to an end when her first husband was laid off and she had to follow him to New York. She moved to New York both pregnant and out of work. Luckily, Kingworld, which distributes the Oprah show, hired her to handle on-air promotions for nationally-syndicated daytime talk shows and news magazine shows. When her girls, Lexi and Nicole, were only 2 and 4, she got a divorce. Mashaal had to scramble to take anything just to make ends meet.

Again Kingworld opened its doors and gave her a job in affiliate relations.

“This industry was very small and very gossipy,” she recalled. “I didn’t go out much, which made it harder because no one had kids and no one knew I couldn’t go out because there were times my electricity was being shut off.”

Luckily a man she worked for, Mike Stranello, gave her a new lease on life. He gave her first producing job on a talk show called Living It Up! with Ali and Jack. From there her career skyrocketed. She developed her own production company with a partner, for which she created, developed, packaged, sold and produced unscripted television. The fear of not being able to support her girls was a great motivator.

In 2006, Mashaal remarried to David Mashaal. She was also chosen for Martha Stewart’s The Apprentice Show. At the time, she had the production company, a printing business and was a real estate title agent.

“They chose me because I was a machine, but a producer on the show used to work for me so they pulled me,” Mashaal recalled. “It was the best thing that could have happened. It opened my eyes. I came home from work one day early and my girls didn’t care I was there. That broke me.”

The fear of her past stayed with her though, but with constant reassurance and stability from her current husband, she was given the ability to stay with the two girls from her previous marriage and her and David’s two boys Matthew, 8, and Zachary, 6. When Matthew was only 3 months old, she was determined to get back to work. After talking a step back though, she realized she wanted to go back when she was ready.

Several years later, a dinner conversation opened a new door. Mashaal wanted to be with her children, but she also wanted to try a new career, this time as a college professor. In time, she received a call from her friends’ husband, giving her an interview with Dean Mahler at LIU. Currently, she is teaching a class called Introduction to Speaking. As of spring 2016, she will be teaching another class, Television from Concept to Consumer. Her daughter Lexi gave her the idea for the class. Lexi is a sophomore at Roslyn High School and wanted to take a class in television, but there was nothing available. Mashaal pitched the idea to the dean in her interview, with the class available for both Media Arts majors and nonmatriculated students.

“The beauty of this class is it marries the business and the creativity of television,” she said. “I am giving them the landscape of the world of television.”

Mashaal added that she will never go back to “crazy hours” again. She loves being able to pass along all she has learned with these students. On top of that, she still has all her time to be a “Mommy slave.”

“Last year when they asked my son Matthew to write about me in class he wrote I was pretty,” Mashaal recalled. “This year he wrote ‘My mommy is so smart
and is a professor.’”