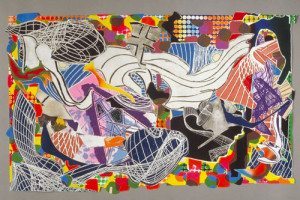 On Monday, Nov. 23 at 1:30 p.m., the Shelter Rock Library will host a lecture by Mary Vahey on the legendary artist, Frank Stella. Stella’s art, among the most vivid of the 20th century, was included in the Sixteen Americans at the MOMA exhibit before he was 25. He is considered of one of the most important living American artists. This visual lecture compliments The Whitney’s Museum’s retrospective of the artist, on view through February 7, 2016. Pictured here is the artwork, Monstrous Whales.