On their son Eli’s second birthday, Port Washington residents Ilissa and Scott Reich announced the public launch of their nonprofit foundation, Believe in a Cure.

Believe in a Cure’s mission is to find and fund a cure for FOXG1 Syndrome, a rare brain disorder that afflicts Eli Reich and some 700 other children worldwide. Most patients are unable to walk, talk or do anything independently. The majority of patients also suffer dangerous seizures and have visual impairment, sleep and movement disorders, general irritability and premature death.

“When we were given this devastating diagnosis, it felt like a repeated gut punch,” Ilissa said. “To learn that your child is not expected to have any quality of life is at once frightening, overwhelming and crushing. We were told that no treatment exists and that the situation was hopeless—that there was no way to save Eli from this horrible fate.”

The Reich’s chose to convert their grief into action and founded Believe in a Cure to fund research and drug development at leading institutions around the world. They have projects and collaborations underway at Harvard University, Massachusetts Institute for Technology, the Broad Institute, Tel Aviv University and the University of Massachusetts—as well as universities and companies in Europe and Asia. 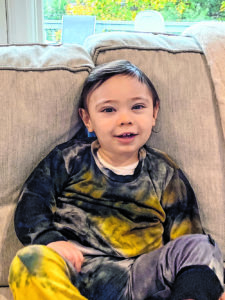 It turns out, the situation is not hopeless. Research already funded by Believe in a Cure has indicated that a treatment is possible and attainable due to recent scientific advances like gene therapy, gene editing and drug repurposing.

“The pace of scientific progress these days is so swift, that from the time of Eli’s diagnosis in September 2019 to today, there are already new ideas for how to treat this condition that didn’t exist just 18 months ago,” Scott said. “More important, our preliminary data is showing that reversibility of the condition is possible, which is truly incredible and gives us real hope. We are catalyzing global collaboration with leading experts as we race against time.”

There are more than 7,000 known rare diseases that afflict hundreds of millions of people worldwide. Most rare diseases do not attract the attention of pharmaceutical companies for commercial reasons, which is why Ilissa and Scott decided to approach their work the old-fashioned way: by building a grassroots community network to raise funds and awareness.

“No one will be more motivated to achieve a goal than a parent seeking to save their child,” Ilissa said. “We’ve basically had to become scientists overnight while taking care of two kids. Eli has around twenty therapies each week, and we’re constantly on the phone with doctors and going to medical appointments. It never ends. We’re fighting to give our son and other innocent kids like him a shot at life, and the clock is ticking on our ability to intervene with a treatment.”

FOXG1 Syndrome is caused by a single-letter mutation in the FOXG1 gene, which is a gene that is critical for cognition. Patients with this condition do not have the right amount of the FOXG1 protein that is created by the gene, which is what causes such severe deficits.

“We’ve learned that the FOXG1 gene has scientific links to more common diseases like Alzheimer’s, schizophrenia, and brain tumors, and it’s on the Autism Spectrum,” Scott said. “So advances in our work can potentially have much broader application, which is our hope.”

Believe in a Cure has a renowned Scientific Advisory Board of leading academics and industry experts, as well as a notable Advisory Council composed of former members of Congress, business leaders, philanthropists and more.

The foundation has generated cell lines and mouse models that allow scientists to test new drugs with the aim of normalizing FOXG1 expression, and testing of novel drugs is already underway.

“It takes millions to develop a new drug, which is why we’ve turned to our community for help, and time is of the essence. We have an opportunity to save lives, and our work will help push the field forward in ways that can benefit the world for generations to come,” Ilissa said.