Roslyn area residents remember Lester Wolff. This 50-year resident of Great Neck, who turned 99 on Jan. 4, is the oldest former Congress member. He earned the title when James Martin, a former congressman from Alabama, passed away at 99 on Oct. 30.

“I feel like I want to hold that title for a long time,” joked Wolff, but he added, “It’s difficult to really live with the title because so many of my friends and colleagues have passed before me. Through the grace of God, I have had the longevity to remain relevant. I’m still active and go to Washington and am still involved in the political scene.”

In fact, he tweets every day at @repwolff and four or five years ago, began streaming Ask Congress, the show he hosted on PBS for many years, so it would remain more current.

“It seems to me that it’s déjà vu all over again,” said Wolff of the current political environment. “Things that happen today are repeats of what’s happened before. The situation with Trump is just a repeat of the days that got me involved in politics in the first place. When [Senator Barry] Goldwater [who was the Republican Party’s nominee for President in 1964] took over, he would go to any depths to achieve what he wanted, regardless of what others thought. That’s what prompted me to run for Congress and that’s what keeps me involved in politics. Goldwater justified any action and had no regard for people.”

Wolff is disturbed about how history is repeating itself and sees a lot of similarities today.

Wolff was born in New York City and raised by a Jewish family who immigrated to the United States in the early 1800s, right after the American Revolution. He still attends services almost very Friday night at Temple Emanuel in Great Neck, and now has six great-grandchildren who are seventh-generation Americans.

The New York University graduate went on to be a become the host of the first political affairs program on NBC, after beginning on the Dumont Network on Channel 5 and moving to WPIX on Channel 11. His popular NBC show, Between the Lines, was nominated for an Emmy. 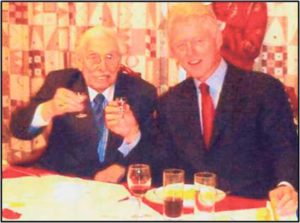 “I was a TV commentator at the time and felt that I had to get involved,” explained Wolff. “The people in Great Neck organized—a youth group of 600 people went door to door campaigning.”

Wolff was first elected to Congress in 1964, after serving for several years in the House of Representatives as chairman of the Advisory Committee. The amendment he put into the Foreign Assistance Act forced President Lyndon B. Johnson to sell F4 jets to Israel, which was a factor in helping Israel survive the attack by the Arabs during the Six-Day War in 1967. His amendments to the Foreign Assistance Act of 1969 restored peace talks between Israel and the Arab states, and he met with Egypt’s President Anwar Sadat.

When Jimmy Carter was elected President, he asked him to send U.S. Secretary of State Henry Kissinger back to continue the talks.

His congressional delegations to China and his relationship with Deng Xiaoping was immensely important in establishing friendly diplomatic relations between the People’s Republic of China and the United States. Two of Wolff’s grandsons currently work for him and are continuing the connection he made in China when he was chairman of Asian Affairs in Congress. During that time, he was principle author of the Taiwan Relations Act, and said that he is still somewhat of a bridge been China and Taiwan.

In 2014, Wolff was awarded the Congressional Gold Medal, the highest civilian honor in the U.S.

He has been involved in charities, such as the United Jewish Appeal and B’nai Brith, as well as the Sons of Italy and Ancient Order of Hibernians.

Despite all he has accomplished in the past 99 years, he said, “I’m continuing to learn.”
Watch Wolff in action on the next episode of Ask Congress at www.askcongress.net.