As part of his workforce development initiative, Governor Andrew Cuomo announced earlier this month that the state will be establishing a $20 million offshore wind training institute in an effort to achieve a clean energy workforce.

“This aggressive, all-encompassing approach to workforce training will bolster New York’s groundbreaking Workforce Development Initiative by helping ensure workers have the skills they need to compete and succeed in emerging industries that are quickly developing across our state,” Cuomo said. “With private sector employment at an all-time high, New York must continue to invest in its workforce, and make certain that our workers have the necessary skills to work in a rapidly-changing economy.”

With the announcement, it was revealed that two schools will be leading the institute: Farmingdale State College (FSC) and Stony Brook University. Both schools will serve as hubs for training as they will hold classes on their main campuses beginning in 2021.
FSC president John Nader said that this was great news that will allow the college to “continue to prepare our economy for the future.” He also shed light on how they got involved in this project.

“Back in November, we, along with the New York State Energy Research and Development Authority (NYSERDA), held a day-long workshop for offshore wind developers, organized labor and companies that can be part of the supply chain to keep the vision for offshore wind moving forward,” Nader said. “We’ve also developed three classes in the wind energy field that will be made available in 2021. We continue to work with NYSERDA and other partners in trying to move the vision of stable wind energy forward. This has been something we’ve been engaged with for some time and we’re really elated to be one of the two centers.”

The college has offered the state three spaces on campus where all aspects of the wind training institute can take place. This includes office space for administration, as well as laboratory and classroom space for developmental and educational purposes.

Nader said that the college’s interest in the wind energy field stemmed from its history of providing education and training in sustainable energy fields.

“The college was one of the first to have solar array, wind turbines and a solar charging port,” Nader said. “We’ve done work in geothermal energy and natural gas, and we are now moving into the wind energy field which I think is one of the best opportunities that has been presented to the college in some time.”

The three classes that will be offered by the college beginning in 2021 include “Wind Energy and Turbine Technology,” “Principles of Fluid Power Systems” and “Wind Turbine Mechanical Systems.” The state’s goal is to have both Farmingdale and Stony Brook train at least 2,500 workers over the course of a five-year period. Nader said that the school is also still awaiting word on a potential coordinating role that they may take in this initiative.
As of now, there are three wind farms that are in development around Long Island. South Fork and Sunrise Wind, operated by Denmark farm developer Orsted, are being built off the coast of Montauk. Empire Wind Farms is off the south eastern shore of the island and is operated by Norway developer Equinor. According to the state, these locations would produce 1,700 megawatts of energy, which is enough to power more than a million homes.

The farms will cost $200 million in state funding and with some turbines powering up as soon as mid-2020.

Under his administration, Cuomo has been pushing to have renewable energy be the main power source for the state and is hoping 70 percent of New York is powered by this energy by 2035. Nader said that Farmingdale State College is thrilled that it’s going to be a leader in this.

“This really speaks to the confidence that the university system and the state of New York have in Farmingdale State College as the center of economical and environmental future on Long Island,” Nader said. “We are really encouraged and heartened by the state’s interest in having us take on this leadership role in the initiative.”

For more information on the college, visit www.farmingdale.edu. For more on the offshore wind initiative, visit www.nyserda.ny.gov. 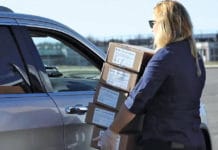