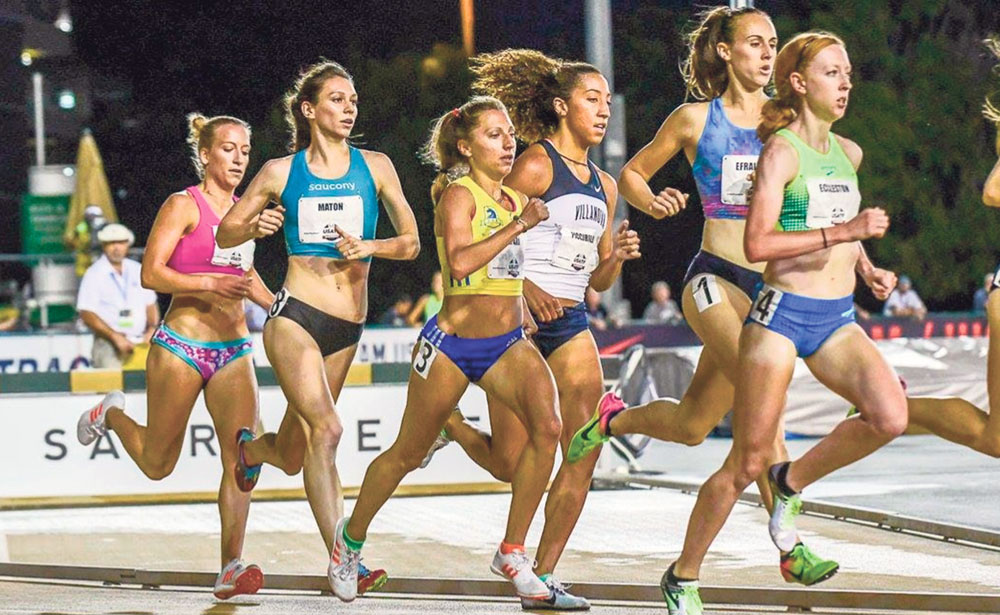 Emily Lipari, a nationally celebrated professional middle-distance runner with hopes of competing in the Olympics, lives out of a suitcase and dedicates herself to traveling, training and running in her bid to be one of the best athletes of all time.

Lipari graduated college from Pennsylvania’s Villanova University in 2014, where she was considered one of the top middle-distance and cross-country runners in the history of their track program. She immediately signed a contract with Adidas and has since professionally engaged in athletic competition, focusing on contests such as the 1,500-meter and one-mile races. She’s engaging in high-altitude training in the rugged California mountains, and this summer she will be competing in Europe including in Ireland, Belgium and other countries, in an attempt to gain experience against international competitors while gearing up for a possible spot on the 2020 Olympic team.

“The Olympics are definitely the end goal, and everything goes on a four-year cycle. We have the Olympics every four years, but the year before and the year after the Olympics are the World Championships, which are essentially the same thing,” she said. “I’m still training to make the U.S. team, and that’s always the end goal and what I’m looking for. I’m focusing on the Olympics in 2020, but it’s not really about what you do that year, it’s what you achieve in the years leading up to it. I’m getting into a lot of races, and I’m training hard.”

Lipari originally graduated from Villanova with a degree in psychology with a minor in biology, and while possible future aspirations of a career in occupational or physical therapy are in the back of her mind, at the moment the 24-year-old is still young and fit enough that she plans on concentrating on her running career for the foreseeable future.

“In this career, you’re actually at a disadvantage if you’re in school or if you have a side job,” she said. “I thought about getting into some kind of program while I was running, but I don’t think I’d be giving myself a true shot if I did that. I’m putting everything else on hold at the moment and I’m dedicating myself to training and running.”

Lipari has been an athlete her entire life. Her parents originally enrolled her in soccer when she was 4 years old, igniting a passion for sport and individual glory that has burned brightly to this day.

“As I got older I continued with soccer. I was on a travel team in high school and we won several state championships. I actually always thought that I was going to college for soccer, but when I got to the eighth grade my parents suggested that I start running in the off-season as well,” she said. “As I started running, my passion for it just grew and I realized that I loved being in control of my own destiny. When you’re on a soccer team, win or lose, you don’t really have much control over it because you’re with 11 or 12 other people. But I love to win—I’m a very competitive person—and when you’re on the track, your destiny is controlled completely by you. If you have a good or bad day, it’s all on you, and I really just loved it.”

Lipari graduated from Roslyn High School in 2010, which she said seems like an eternity ago. But while toughing it out on the road, she said her thoughts often return back to the support and training she received from her high school coaches, saying that she certainly wouldn’t be where she is today without their help.

“The further I get from Long Island, the more I actually miss it. I had a really close relationship with my two Roslyn High School coaches, and I think the reason why I have a blossoming career right now is because they were great, intelligent coaches,” she said. “My coaches really helped me to grow up to be a really great athlete and I’ve always been very thankful for all the advice and help they’ve given me. When I think about it, I really miss home a lot. I live a very nomadic lifestyle, and I’m never in any place for longer than two months, so whenever I get to go home I always try to spend an extended amount of time at Roslyn High School and relive all of the wonderful memories that I have there.”

Today, Lipari said that the one accomplishment that she takes the most pride in as an athletic competitor—and she has many—is when she won the National Collegiate Athletic Association (NCAA) indoor championship, which was one of her first big individual titles.

“It meant so much, winning the NCAA title and I was just in tears,” she said. “And one of my favorite memories from high school was when I won Penn Relays 3,000 meter race for the first time. I was not expected to win and it was in front of a giant stadium and I won a gold watch and everything. It was very emotional for me.”
Running is a career path that keeps her on the road. Lipari rarely gets to see her family or the boyfriend she’s had for the last five years, an engineering officer in the U.S. Navy and fellow Villanova grad. As a result of their mutually hectic lifestyles, Lipari said the couple are lucky if they see each other twice a year, but nonetheless remain committed to each other.

“It can be really difficult having a long-distance relationship. We’ll go months without seeing each other and we’re almost never in the same spot, but we’ve been making it work and seeing each other when we can,” she said. “Right now that I’m on the west coast it’s a little easier to see him, but one day it’ll be nice for us to have a future together. But for now, we have a very unconventional relationship.”

In addition, Lipari said that her family has been supportive throughout her running career, encouraging her no matter what to give it her all in every single race. It’s that backing from her loved ones, she said, that will make her a champion just as much as hard work and determination.

“I have an amazing family that’s really supportive,” she said. “My mom, my brother, my dad—everybody is so into my running life no matter what and my parents come to every single race. They love it so much and they were in tears when I won nationals. Their love and support has helped so much as I work to achieve my goals.”