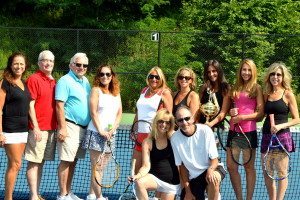 The East Hills B2 women’s tennis squad capped off a productive summer by winning the North Shore Women’s League tennis championship. The league consists of over 100 clubs participating in competitive match play in numerous divisions.

“The win makes us all proud,” said Village of East Hills Mayor Michael Koblenz. “It is a great accomplishment by some very extraordinary and talented athletes.”

The team will further celebrate their victory when all the clubs in all divisions meet for an end of season party in September.