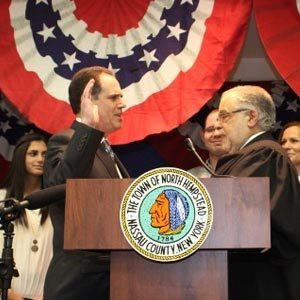 For the time being, much of the Roslyn area is without representation on the Town of North Hempstead council. Recently, Thomas K. Dwyer, who represented Roslyn on that body since 2002, announced that he would step down from the board while he is currently in negotiations with a Manhattan-based consulting firm.

Dwyer, who is the chief operating officer of the Syosset-based American Land Services, would not identify the firm he is talking to, but he said that the new job, if he takes it, would represent a conflict of interest with his work on the town board.

Dwyer was first appointed to the town board in 2002. The next year he was re-elected by a convincing 4,382 to 1,889 win over his challenger, Jerome J. Galluscio. Since that win, he has faced little trouble in getting re-elected. In the immediate future, a new member will be appointed to replace Dwyer. That seat will be up for election in 2014 and again in 2015, when Dwyer’s latest term would have ended.

Dwyer told the media that he considered his main accomplishments as helping to bring the town “into the 21st century,” listing such iniatives as work on town parks, roads, the 311 system and the environment.

For residents in Roslyn Heights, Dwyer will be remembered as the board member who took the lead in deciding the future of the Country Club of Roslyn. Indeed, while announcing his resignation, he declared the resolution of the park issue as one of his proudest achievements. After more than a decade of stalemate, the Town of North Hempstead voted late last year to approve a Levitt Park at Roslyn Heights park district. The basic plan will be a park district 7.3 acres in size and including an outdoor heated pool, a Jacuzzi/spa area, a water slide and plunge pool, a playground, a kiddy pool and splash pad, a concession and outdoor seating area, plus a bathhouse, lower and upper poolside promenades and resurfaced tennis courts.

“We worked out a very, very nice solution,” Dwyer said at a December 2012 meeting, adding that the town would build a “Class A park to what is now a hole in the ground.”

On the same issue, then Town of North Hempstead Supervisor Jon Kaiman also declared last December that ‘[there’s been] no other issue I’ve engaged in [more fully] that this one.”

Todd Zarin, a Roslyn resident who was active in the plan to revive the country issue praised Dwyer’s efforts on that issue and on his service in general.

“Tom defined local representation of his district both in and outside of Roslyn Country Club for more than a decade,” he said. “He is a beacon for those viewing success in public service as leaving it better than you found it. The brilliant prospects for Roslyn Country Club residents captures his legacy. I’m confident that Tom’s impact will be indelible and his tireless and creative advocacy and efforts on our behalf will be missed. His successor will have big shoes to fill.”