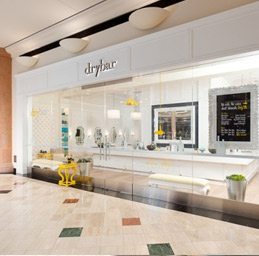 Drybar, the “No Cuts. No Color. Just Blowouts” styling center with franchises across the country, is set to come to Long Island.

And the village Drybar founder Alli Webb has selected is Roslyn. On Saturday, March 28, Drybar will open a salon at the increasingly popular “250 Center” on 250 South Service Rd.

Founded in 2010 in Los Angeles, Drybar has already received national recognition as a top destination for female hair styling.

Webb was recently named to the 2013 Fast Company 100 Most Creative People in Business, the Cosmo 2013 Power List by Cosmopolitan magazine and the Fortune 40 Under 40 List.

The Roslyn location will offer the brand’s signature blowouts at a flat rate of $40. Drybar joins other luxury tenants in the 250 space, including Lululemon Athletica, SoulCycle, Truth + Beauty and Bar Method. Drybar’s style list reads like a favorite cocktail menu: The Cosmopolitan (lots of loose curls), the Straight Up (simple and straight), the Southern Comfort (big hair with volume), the Mai Tai (messy and beachy) and the Manhattan (sleek and smooth).

The March 1 grand opening will mark a homecoming for Webb who was born in East Meadow before moving with her family to southern California. Webb’s brother, Michael Landau, is the company’s co-owner and both are excited about their return to Long Island.

The Roslyn location will represent the 33rd store nationwide for Drybar. Headquartered in Los Angeles, Drybar has numerous stores in California, along with franchises in Chicago, Boston, Phoenix, Dallas, Atlanta, Houston and Washington, DC. Drybar also has five locations in New York City, including the Tribeca, Murray Hill and Flatiron neighborhoods. Choosing Roslyn out of all the possible locations on the North Shore is another testimony to the Roslyn area’s ability to keep and attract top-scale businesses.