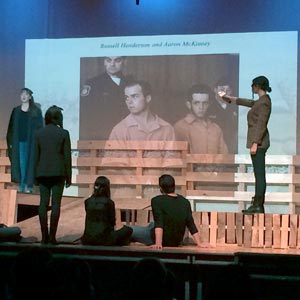 “Hate is not a Wheatley value.” That’s one of the slogans cast members donned on the large pins they wore to school attached to black outfits on Thursday, Nov. 21, to signal the premiere of their play, The Laramie Project, that evening.

This was no run-of-the-mill, happy-go-lucky, elaborate musical the school is famous for. It was an incredibly serious undertaking, especially for high schoolers.

The play tackled the real-life kidnapping, brutal beating and murder of an openly gay University of Wyoming college student, Matthew Shepard. The Laramie Project was created by Moisés Kaufman and fellow members of New York’s Tectonic Theater Company from more than 200 interviews with local residents recounting the event. The drama illuminates how this one horrific act reverberated throughout the world.

“This year marks the 15th anniversary of Matthew’s murder and presents the Wheatley community a unique opportunity to have an important conversation about bullying, tolerance and human rights,” said Colin McKenna, Wheatley English teacher and the show’s director. “In addition to the important social impact of the play, this docudrama also gave our students a chance to interact with living history and well-sourced research.”

“Someone once told me theater is social change and I think that’s really true,” said Misk, a sophomore who played several roles in the play. “I loved getting an inside look at not just telling the story, but telling how it affected so many people and it really touched my heart.”

“For me what made the show so special is that we’re talking about real people, we’re telling a real-life story, which isn’t something that’s normal for most plays. It shows how much theater can touch real lives and show so many great things through that. It was such a great experience,” said Wolgel, Wheatley senior and secretary of The Wheatley Theater Company, who portrayed multiple characters.

“The choice of The Laramie Project is representative of what this district has always done,” says 1974 Wheatley graduate Jerry Jacoby. “I don’t know how many other districts would put on such important works at the high school level.”

After the opening performance on Thursday, Wheatley sophomore Andrew Schloss, who attended the show with several members of Temple Sinai’s Generation Equality group, said, “Just saw an amazing performance of The Laramie Project: a powerful and moving play about how a small amount of hate by very few can destroy an entire community and change a nation’s opinion on previously sensitive matters. It is a drama that speaks to the heart.”
In 2009, President Barack Obama enacted the Matthew Shepard and James Byrd, Jr., Hate Crimes Prevention Act, making it a federal hate crime to assault people based on sexual orientation, gender and gender identity. During the reception, the President said, “At root, this isn’t just about our laws; this is about who we are as a people. This is about whether we value one another—whether we embrace our differences. We have for centuries strived to live up to our founding ideal, of a nation where all are free and equal and able to pursue their own version of happiness. Through conflict and tumult, through the morass of hatred and prejudice, through periods of division and discord we have endured and grown stronger and fairer and freer. And at every turn, we’ve made progress not only by changing laws but by changing hearts, by our willingness to walk in another’s shoes, by our capacity to love and accept even in the face of rage and bigotry.”
Director Colin McKenna explained the significance of the actors wearing quotes from the play on pins to promote the drama’s message. “In the aftermath of Matthew’s murder, many businesses in Laramie posted signs declaring, ‘Hate is not a Laramie value.’ This line has resonated with our company and we often parrot it with a slight alteration, ‘Hate is not a Wheatley value.’ My hope is that the final result of the Matthew Shepard tragedy is a country that declares, ‘Hate is not an American value.’ ” What a great lesson.”